Founded in 2014, the iHeartRadio Music Awards is a show that recognizes the most popular artists from each year. It pertains directly to those who rank on the iHeart Radio Chart, and takes into account listener feedback, digital streaming data, and sales numbers when selecting winners. Artists up for consideration tonight include Drake, Adele, The Chainsmokers, Justin Bieber, and Rihanna.

In addition to standard categories like Artist of the Year and Song of the Year, the iHeartRadio also celebrates artists with their annual Innovation Award. The prestigious title (touted as the the show’s highest honor) goes to a performer who’s made great strides in music and showcases the ability to mold and influence the sounds that define the modern pop scene. This year, the Innovator Award will go to Bruno Mars, who will also perform his latest single “That’s What I Like.”

Discover the esteemed company that Mars will be joining below.

Pharrell Williams was the first recipient of the Innovator Award in 2014, where he was honored for his revolutionary creativity in the arts. Fellow singer and The Voice host Gwen Stefani gave an overjoyed introduction speech, calling Williams “pretty much the coolest guy ever,” before a video montage sprinkled in praise from peers like John Legend, Shakira, Usher, and Oprah Winfrey.

Williams, who moonlights as one half of the production duo The Neptunes, was visibly touched by the ceremony, and graciously thanked his wife and children for “lifting me so high.” He added that to achieve your dreams, you have to “believe in something bigger than yourself.” Williams went on to perform a medley of hit songs that included “Happy,” “Come Get It Bae,” “Blurred Lines,” and “Get Lucky.” Check out his full acceptance speech above.

Not only did Justin Timberlake win the highest honor during the 2015 iHeartRadio Awards, he also provided the ceremony with its most heartfelt speech. After a touching introduction from fashion designer Tom Ford and a video tribute that included interviews with Timbaland, Jimmy Fallon, and Taylor Swift, Timberlake took the stage to voice his appreciation.

“If you’re a young person like I used to be, and you’re at home watching and you’re being called weird or you’re being called different,” he shared, “I’m here tonight to tell you your critics do not count. Their words will fade, you won’t. Dream, work hard, and who knows maybe someday you’ll find yourself standing on a stage and maybe someday somebody will be giving you an award calling you an innovator.”

When asked about Timberlake, the iHeartRadio President of National Programming called him “one of the most dynamic artists of our lifetime, a visionary whose influence on pop culture starts with brilliant music and stretches well beyond.”

U2 took home the Innovator Award in 2016, celebrating not only their iconic stature but their ability to stay relevant after four decades in the music industry. “It is extremely rare,” said iHeartRadio Programming President Tom Poleman, “to have a band that has spent decades not only changing music, but helping change the world with their tireless dedication to important social causes focusing on AIDS, poverty, cancer, the environment, Hurricane Katrina and much more. We’re thrilled to be able to honor U2 with the 2016 iHeartRadio Innovator Award.”

Lead singer Bono and band members Adam Clayton, Larry Mullen, Jr. and The Edge were also nominated for Best Tour in 2016, but the Innovator Award (and its accompanying montage) still proved the most special moment of the night. “They began as a punk band and that attitude still runs strong throughout their songwriting, albums and live performances,” said iHeartMedia President John Sykes, “They will never stop testing the limits, and that’s why we are honored to recognize them.”

Bruno Mars performs a tribute to Prince during The GRAMMY Awards on February 12, 2017. (Photo by Kevork Djansezian/Getty)

Mars will become the fourth recipient of the award during tonight’s show. In a statement made by Sykes last month, he explained how iHeartRadio was “proud to have Bruno join Pharrell Williams, Justin Timberlake, and U2 in the elite group of iHeartRadio Innovators. From the start of his career Bruno has been fearless in his approach to all things creative.”

The praise was furthered by Tom Poleman, who feels that Mars has “raised the bar for both performers and musicians worldwide. Not only does he have incredible passion for his craft, but he has the talent to back it up. Bruno has reinvented music pop culture and we are honored to present him with one of the most prominent awards of the evening.”

Mars is scheduled to be the inaugural performance of the show when it airs at 8 p.m. EST on TNT, TBS, and TruTV. Learn how to stream the iHeartRadio Music Awards right here. 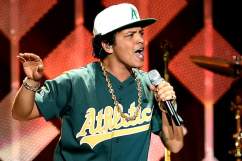