Eminem performs at Lollapalooza on August 1, 2014 in Chicago, Illinois. (Photo by Theo Wargo/Getty)

Could “The Real Slim Shady” rapper be cooking up some new music for 2017?

According to former Stat Quo, the answer is yes. In an interview with HipHopDX, Quo (born Stanley Benton) mentioned that while he is no longer part of the Shady Records circle, he is still in tight with those who are, and is privy to information from within. As such, he he told the site that Em is indeed in the studio recording new material for an unannounced project.

Welcome to the family @westsidegunn @whoisconway @griseldarecords #shady #griselda #detroit #buffalo hit the link in the bio to read more and hear their new track.

Stat Quo discussed a great many things during the interview, including why him and Eminem parted ways, and even his perspective on the Nicki Minaj-Remy Ma feud, but the most surprising– and exciting– bit of news was when he mentioned a phone conversation with veteran producer Mr. Porter, who is reportedly making new music with Eminem. “Denaun [Porter] called me yesterday,” Quo revealed, “When him and Em were working on the album and he was telling me.”

Eminem’s last album was The Marshall Mathers LP 2, which took home the Grammy Award for Best Rap Album in 2015. He recently made headlines for his guest verse on Big Sean’s single “No Favors,” where he dissed President Donald Trump and called him a “b*tch.” 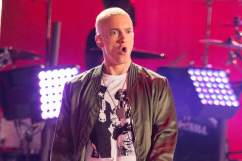