Zayn Malik and Harry Styles will always be linked in the public eye, as the two were the most prominent members of One Direction. That being said, it looks as though their relationship is growing strained as they pursue successful solo careers.

According to HollywoodLife, Zayn is growing increasingly fearful that Harry’s new solo material will outshine his own. A source close to the “Pillow Talk” singer revealed that he’s “been flying high on his success as a solo artist, but he’s stressing now that Harry’s coming out with a new album. He’s worried that Harry is going to steal his thunder and overshadow what he’s worked so hard for.” Check out the video teaser for Harry’s debut single, due out April 7th.

The source goes on to say that “Out of all the 1D guys, Harry is the one Zayn has always felt the most competitive with, and with good reason. He’s been hearing from music insiders that Harry’s new work is the bomb, it’s edgy, it’s different, and it’s going to dominate the charts.” Zayn’s exit from the group was amicable in 2015, and there was never any ill will towards his One Direction peers, as he told The Sun: “I feel like I’m doing what’s right– right by myself and right by the boys, so I feel good.”

Nevertheless, will the stress of Harry’s musical buzz lead to a legitimate musical feud? Both albums are tentatively scheduled for sometime this summer, only furthering what seems to be a competitive rollout in the making. In the meantime, listen to Zayn’s latest single, “Still Got Time,” below. 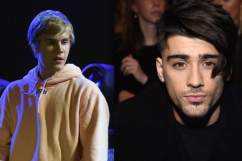