The Big 3 have arrived. Nicki Minaj, Drake, and Lil Wayne have made good on their rumors and delivered a new track, titled “No Feuds.”

Minaj, after reports that she would not respond to Remy Ma, has now struck back with a vengeance, rapping lines like “what time of bum b*tch shoot a b*tch over a rap? What type of mother leave her one son over a stack?/Lil Boogie down basic b*tch thinkin’ she back/back to back, oh, mean back to wack.”

Other notable lines include “Back to Back, me and Drizzy laughed at that/They say numbers don’t matter, but when discussin’ the kings/they turn around and say LeBron ain’t got six rings.” Minaj also released the singles “Changed It” and ‘Regret In Your Tears” as part of her “big three bundle.”

Still, it’s “No Frauds,” with additional verses from Young Money megastars Drake and Wayne that has taken over the internet. It seems as though Minaj was simply biding her time until the right moment to strike, and with Remy Ma’s second diss “Another One” falling flat with listeners, it looks as though she has the upper hand.

Buy the new track here and check out some of Twitter’s best reactions below.

SO FUCKING HAPPY DRAKE AND WAYNE STOOD WITH NICKI AND THE RESPONDED ALL AT ONCE , G A N G ?? @NICKIMINAJ SOUNDING LIKE A SEASONED VET TOO ??

Let's get into @NICKIMINAJ getting on this track, riding the beat w/ an ILL flow, & eating her up, THAT'S HOW YOU REIGN QUEEN #NoFrauds

They say numbers don't matter, but when they discussing the kings. They turn around and say Lebron ain't got 6 rings. @NICKIMINAJ #NoFrauds pic.twitter.com/CUneinKVJ8 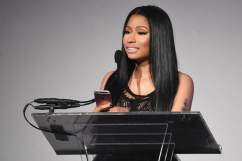