After nearly a week of waiting on Nicki Minaj, Remy Ma has released a second diss record, the aptly title “Another One.”

Remy got tired of Minaj’s lack of response, who avoided the “Shether” backlash by focusing on a music video (and dating rumors) with Future. Turns out, Remy Ma was just biding her time, and took a page out of Drake’s feud book by directly addressing these moves in a second diss. “Not again, not again,” she ominously says in the opener, echoing the flow that Drake used to body Meek Mill in “Back to Back” (2015).

“I guess you know now who the head b*tch is, Remy mocks, before asking “I mean where the f*ck is your song, I mean ‘cmon!” The shots don’t stop there, either as the “All The Way Up” rapper also takes time to call out Minaj for not taking a little L, but “a big L” and musing that “I guess this what I gotta do to make ya’ll spit.” Whereas “Shether” used Nas’ “Ether” (2001) as a reference, Remy Ma clearly has Drake’s second Meek Mill diss in mind here, and she wields her lyrical weapons to maximum effect.

Click here to listen to “Another One” and check out the original “Shether” track below! 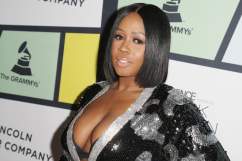