Kendrick Lamar stunned fans when he released “The Heart Part 4” last week, and again on Thursday night when he released a music video for the song “Humble.” Lamar has had a history of unique album rollouts, particularly with the surprise announcement of his last project, untitled. unmastered. (2016), but listeners are still unsure as to whether they will get the rapper’s fourth album on April 7th.

Fortunately, it looks as though Lamar’s fellow Black Hippy member ScHoolboy Q has the inside scoop. The “THat Part” rapper Snapchatted a photo of himself playing “Humble” on his phone, with the caption “When you got the whole album and can finally put your jam on snapchat.” Based on this sly reveal, its safe to assume that not only is the album finished, but copies of it have already begun circulating around the TDE studio.

While ScHoolboy failed to mention whether April 7th is the official release date, the fulfillment of every other promise on Lamar’s part makes it seem as though the odds are high. Watch the video for “Humble” below. 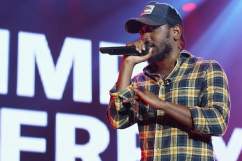