Soulja Boy has been having some family issues as of late.

Less than a week after his brother John Way released a diss record called “Overdue“, Soulja Boy was criticized by his mother, who implied that he left her broke and “in the ghetto.” It’s obvious that there is some ill will felt between them and Soulja Boy, who first rose to fame with the single “Crank That” in 2007. Check out the family’s video below.

Now, Soulja Boy has taken to social media to set the record straight and voice his anger over these supposedly false claims. He tweeted that he’s going to “expose my mom and my brother. She a crackhead and and he live with my dad he not in the hood they looking for a come up.” Soulja Boy concluded his message with a plainspoken “F*CK THEM.”

Soulja didn’t stop there, however, explaining his stance on why he doesn’t give money to his mother. “I got a new mansion and millions in bank I don’t gotta give money that I don’t want to. Especially if u blow $100,000 every week for years.” Read the full messages below, many of which have been deleted.

New interview coming soon clearing all these fake ass stories up. Love y'all 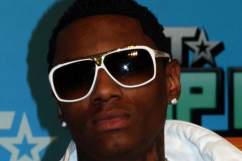