T.I. performs during the 2017 SXSW Conference in Austin, Texas. (Photo by Matt Winkelmeyer/Getty)

The battles between Donald Trump and various celebrities continue.

On Monday, TV personality Steve Harvey addressed the recent spats that rappers like Snoop Dogg, Bow Wow, and T.I. have had with Trump, saying “I love Snoop. Bow Wow, always respectful and cordial with one another, me and T.I. I don’t have no problem with T.I. I love the dude. I’m just saying brothers be smart. You gotta be smart man. All y’all talking got money. You got money, man. You got money and they know how to go after that money. Just be smart, let me tell ya man, leave the first lady out of this. Y’all going down another path with these cats now. You start messing with they wives. I’ll tell y’all you going down another path.”

The hashtag is a reference to the recent horror film Get Out, which has a theme of black people who are put in a “sunken place” after being hypnotized. Clearly, T.I. believes that Harvey is one such example of a celebrity who is “sunken.” 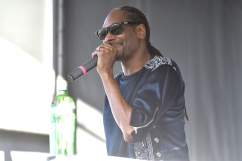