The Chainsmokers are quickly becoming a household name in pop music. With their eclectic blend of funk, EDM, and trap, DJs Drew Taggert and Alex Pall burst onto the scene in 2016 and have excelled ever since. Singles like “Closer” and “Paris” have been commercially successful crossover hits, while collaborations with Halsey and Coldplay have earned the duo critical acclaim.

Tonight, The Chainsmokers will continue this winning streak at the 2017 iHeartRadio Music Awards. The duo will perform their new single “Something Just Like This” alongside Coldplay singer Chris Martin, but even more impressive is the fact that they’re nominated for 11 awards; including Song of the Year, Dance Artist of the Year, and Best Duo/Group of the Year. So, before the festivities begin, here are five fast facts you need to know about The Chainsmokers.

1. They Originally Had A Different Lineup

The Chainsmokers were initially made up of Alex Pall and DJ Rhett Bixler. Though they formed in 2012, it wasn’t long before Bixler departed the duo and manager Adam Alpert was forced to find a replacement. Fortunately, an assistant of his knew a DJ named Drew Taggert and informed him of The Chainsmokers vacancy. With the new lineup of Pall and Taggert, the duo gained traction by doing remixes of popular indie songs.

“We hit up tons of indie bands,” Pall told News.com in 2016, “Most of them were like ‘you guys are cool but we are doing our own thing.’ And we worked with some other people on “Roses” and “Waterbed” and it used to frustrate me that we would waste a session, that it didn’t work out at first. But that’s the way you learn, we did 50 remixes before we had a hit.”

That defining hit would be the 2016 single “Closer,” featuring Halsey. Released as part of the Collage EP, it exploded onto the charts and set the record for most weeks spent in the Billboard Top 5 with 26. The Chainsmokers found even more success on the Billboard’s Hot Dance/Electronic Songs Chart, where it usurped Avicii’s “Wake Me Up!!” with an all-time record of 27 weeks at number one. According to Capital FM, “Closer” went on to become the third biggest single of 2016 with 2,124,000 units sold.

The Chainsmokers have also become the first musical act to have four songs top the Hot Dance/Electronic Songs Chart, surpassing Calvin Harris’ previous record of three. This included “Closer,” “Roses,” “Don’t Let Me Down,” and “#Selfie,” which first charted back in 2014. When asked about their success by Harper’s Bazaar, Pall said: “It’s just really dope that we’re getting to do what we love and doing it how we like it—so we just want to keep doing that.”

3. They Broke The Record For Most YouTube Views In A Day

Recently, The Chainsmokers have moved away from Billboard history and started making YouTube history instead. “Something Just Like This,” their collaboration with iconic rock group Coldplay, had a cataclysmic debut when it was released on YouTube, as the video racked up 9 million views in a single day. It toppled previous record holder Justin Bieber, whose video for “What Do You Mean?” earned 8.2 million views during its first 24 hours.

Incredibly, the video for “Something Just Like This” is sans Chris Martin or The Chainsmokers (the video is animated short with lyrics), meaning that the music itself was enough to draw in 9 million fans. As of March, the single has earned over 56 million views.

4. DeadMau5 and Pharrell Are Among Their Musical Influences

The Chainsmokers sound is an amalgamation of multiple styles, but the ones that stick out most are DeadMau5 and Pharrell Williams. In an interview with Rave Rafting in 2013, Taggert spoke about the importance that DeadMau5 had on him as a DJ: “I remember I saw Deadmau5… I’ve been a Deadmau5 fan, and Deadmau5 is like, the reason I started producing electronic music.” Taggert went on to say that he loved the single “Faxing Berlin, with those big, trance-y plucks that he has in that song, I was like, okay, that’s the sh*t.”

The duo went on the cite a great number of different artists, including James Blake, Diplo, Drake, and most importantly, singer/producer Pharrell Williams. When asked why Pharrell is so influential to them, Taggert gave a short, sweet response: “Cause he’s just the man.” Pall added that people like Williams who are “creatively talented but have a strong foundation in business” are what they aspire to be.

The Chainsmokers have already won some hardware in their relatively short career, including an American Music Award and an NRJ Music Award. But the prize that’s proven most impactful, and impressive, was when the duo won the Grammy Award for Best Dance Recording in 2017.

Taggert and Pall recounted their surreal experience with People Magazine, saying that it was “actually in the pre-ceremony” that they found out they won, and “we were in a car but it was a very big car with a bunch of people in it, all our family and friends, and we just screamed for about five minutes.” Besides their win for the single “Don’t Let Me Down,” The Chainsmokers were represented strongly with nominations for Best New Artist and Best Pop Duo/Group Performance for “Closer.” 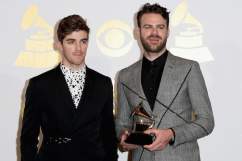 The Chainsmokers Discuss New Coldplay Collaboration ‘Something Just Like This’