Keke Palmer is an actress best know for her work on Akeelah and the Bee (2006), Brotherly Love (2015), and the television series Scream Queens (2015-). When she’s not in front of the camera, however, Palmer has made headlines for her personal life– including a controversial claim regarding her sexuality in 2016, and earlier this year, when she accused singer Trey Songz of sexually intimidating her.

Palmer took a more celebratory side of herself on twitter Tuesday morning, as she posted a video of her dancing and lip-synching to Aaliyah’s 2001 song “More Than A Woman.” The actress proceeds to get down in the middle of a city sidewalk, while channeling the attitude of the late great Aaliyah. “An #AaliyahDay,” Palmer writes in her caption, “but the gag is, that’s errday.” The clip has since become a trend of Twitter, with many praising the actress’ moves.

This isn’t the first time Palmer has paid tribute to the singer in the form of dance. In 2016, she released a music video called “Yellow Lights” that saw her emulating Aaliyah’s fashion style and vocal cadence. You can watch the video for “Yellow Lights” right here. 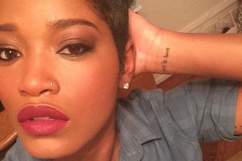