Snoop Dogg has released the music video for “Lavender,” which features Kaytranada and jazz quartet BadBadNotGood, and it comes with some brash political statements.

The video finds Snoop playing a game show host in a world full of clowns. These satirical figures include a clown version of President Donald Trump, who goes by the name of “Ronald Klump” here– before Snoop shoots him down in haste. This plays into the rapper’s current view of politics, as he believes “The whole world is clownin’ around… the concept is so right on point with the art direction and the reality, because if you really look at some of these motherf*ckers, they are clowns.”

Director Jesse Wellens told Billboard that the video, which also touches on police brutality, was inspired by the shooting of Philando Castile. “When I originally wrote the idea of the video, the video of Philando Castile getting shot came out online and it was causing riots. We just kind of wanted to bring the clowns out, because it’s clownery– it’s ridiculous what’s happening.”

Snoop echoed this opinion, saying that his goal was to make a song that was “not controversial but real – real to the voice of the people who don’t have a voice.” Snoop went on to tell The Hill that “Nobody’s dealing with the real issue with this f**king clown as president, and the sh*t that we dealing with out here, so I wanted to take time out to push pause on a party record and make one of these records for the time being.” 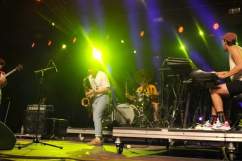