On April 29th, 1992, four police officers were found not guilty of using excessive force in their arrest of Rodney King. Hours after the verdict was announced, riots broke in South Central Los Angeles, eventually spreading to other parts of the city. President George H.W. Bush was forced to call in the national guard, and even then, it took a total of five days for the rioting to cease. When all was said and done, 55 lives were lost, and billions of dollars worth of damage had been caused.

It was an event that shook America to its core, putting a face to racial turmoil in the media and forcing many to acknowledge the effects of police brutality on African American citizens. Artists from every genre rushed to reflect this fragile state in their music, and many, as a result, provided a soundtrack for those who were forced to deal with the aftermath.

So, on its 25th anniversary, we compile the 10 most notable songs that were inspired by the Los Angeles Riots.

Dr. Dre was no stranger to racial controversy when he released his solo debut The Chronic in December 1992. As part of the group N.W.A, Dre provided instrumentals for some of the most cutting, abrasive lyrics that had ever been put to record. It then comes as no surprise that he would make reference to the Los Angeles Riots on the album cut “The Day The N*ggaz Took Over.” Over a beat that oozes menace, guest emcees Daz Dillinger, Snoop Dogg, and RBX unleash a wave of angry lyrics:

“Dem wonder why me violent and no really understand / For de reason why me take me law in me own hand / Me not out for peace and me not Rodney King / De gun goes click me gun goes bang / Dem riot in L.A. cuse dem  no really wanna see / N*ggas start to loot and police start to shoot.”

In the 1997 documentary Rhythm And Rhyme, Dr. Dre spoke on the impact that the riots had on The Chronic, saying “The music talks about crime, violence, and drugs because it exists… for me, it’s nothing political to it.”

Yes, this Sublime song is titled “April 29, 1992 (Miami).” And yes, lead singer Bradley Nowell does sing it as “April 26, 1992” on the chorus– a glaring mistake that was ultimately overlooked because the group felt that it was the best take. Whatever confusion pertains to the title, however, is done away with in the song’s content, as “April 29, 1992 (Miami)” directly references the L.A. Riots and the group’s involvement in the looting and burning that was taking over the city.

Granted, a white ska band wasn’t exactly the posterchild of the riot movement, but that didn’t stop Sublime from penning an outlaw anthem that still feels raw by today’s standards. Over a sluggish guitar riff that borrows vocal snippets from Doug E. Fresh, Nowell proudly sings of his participation “You were sitting home watching your TV / While I was participating in some anarchy… Next stop we hit it was the music shop / It only took one brick to make the window drop / Finally we got our own P.A. / Where do you think I got this guitar that you’re hearing today?” The song later delves into issues of inequality regarding African Americans and Mexicans, but at its core, its all about the chaos.

Nearly a year after the Los Angeles Riots had ceased, R&B quartet En Vogue decided to approach issues of inequality and prejudice from an positive outlook. Opening with a vocal snippet of the sketch series In Living Color (“Prejudice, want a song about it? Here you go”), En Vogue proceed to drop their smooth, signature sound for a tough guitar riff and lyrics that preach acceptance of one another: “I wear tight clothing, high heeled shoes / It doesn’t mean I’m a prostitute, no no / I like rap music, wear hip-hop clothes / That doesn’t mean that I’m out here sellin’ dope no no.”

“Free Your Mind” became a top 10 hit on the Billboard Hot 100, while the music video, which featured group members Terry Ellis, Dawn Robinson, Cindy Herron, and Maxine Jones in black leather clothing, swept at the 1993 MTV Video Music Awards. It would go on to win for Best Choreography, Best Dance Video, and Best R&B Video.

By far the most recent inclusion on the list, this 2011 song is rapped entirely from the perspective of Rodney King, on the day leading up to his attack. California emcee Thurz paints a stunningly detailed portrait of the man, capturing stream-of-consciousness topics like basketball scores and weed smoke before his infamous showdown with the police: “They order us out the car, the two homies step out / But I feel like I’ve came too far to be another n*gga behind bars.”

The song reaches its apex in the third verse, where Thurz spits a grueling account of the attack, with lines like “The pigs tried to swarm on me / They saw I physically resist,” and “They bring the taser out, fire into my back / They think I’m on PCP, and I ain’t even attack / Fall to my knees, then stand to a death trap / They tase me again, am I treat, or ’cause I’m black.” The concept album L.A. Riot details other aspects of the time, but it is “Rodney King” that leaves the strongest–and most brutal– impression.

The Los Angeles Riots just so happened to take place the same day David Bowie and his wife Iman were in the city looking for homes to buy. Shocked by the brutality of what he saw, Bowie took the experience and channeled into “Black Tie, White Noise” the title track from his 1993 album. “It’s very important the promote the coming together of disparate elements of any nation, specifically America,” the singer told Rolling Stone the following year. It was a sentiment that informed both the sound and the visuals of “Black Tie, White Noise,” from the inclusion of R&B singer Al B. Sure! to the intercut footage of poor children playing in the music video.

Bowie would later explain that the song was about the identity of different ethnic groups, and how they deserved to coexist without being forced to absorb one another. It underperformed on the Billboard charts, but the message of Black Tie, White Noise eventually caught on, as the accompanying album would go on to signify an artistic renaissance for Bowie.

Rage Against the Machine was born out of the unrest and aggression that was Los Angeles in the early 1990s. Led by vocalist Zack de la Rocha, Rage’s mission as a band was simple: to rock as hard as humanly possible. And nowhere was this more evident than on their self-titled 1992 debut, which featured classic songs like “Bombtrack,” “Bullet In the Head,” and “Killing In the Name,” which directly tackled the role that police brutality played in the riots. “Some of those that work forces, are the same that burn crosses,” goes the opening refrain, equating the police officers who beat Rodney King with members of Ku Klux Klan.

The comparisons don’t let up from there, either, as Rage builds the song around lyrical repetition like “Now you do what they told ya” and “F*ck you, I won’t do what you tell me.” The latter line gets repeated a startling sixteen times, increasing in volume until its being screamed at the top of de la Rocha’s lungs. While other artists provided a more articulate approach to the riots at the time, there’s no denying the power that’s felt when listening to this seminal Rage Against the Machine track.

2Pac‘s connection to the L.A. Riots is not as direct as it may initially seem. In 1992, the legendary emcee had only one studio album to his name, and was still mainly known as a protege of the playful group Digital Underground. It wasn’t until the release of his next album, Strictly 4 My N.I.G.G.A.Z. (1993), that ‘Pac began to shape the politically-charged persona, and by then, direct focus on the riots had begun to dissipate. This is what makes “Hellrazer” such an important piece of his catalogue.

Released on the posthumous album R U Still Down? (1997), the song finds 2Pac as his most emotionally aware, discussing the plight of the African American in society, with lines like “Now am I wrong if I am don’t worry me / ‘Cause do or die gettin’ high till they bury me.” ‘Pac then evokes the death of LaTasha Harlins, a girl whose murder was one of the main causes of the L.A. Riots, rapping “Dear Lord if you hear me tell me why / Little girl like LaTasha had to die / She never got to see the bullet just heard the shot / Her little body couldn’t take it, it shook and dropped.” A powerful verse from one of the most powerful emcees who ever did it.

“Livin’ On the Edge” (1993) finds Aerosmith singing from a place of profound social commentary: “There’s something wrong with the world today / I don’t know what it is / Something’s wrong with our eyes / We’re seeing things in a different way / And God knows it ain’t his / It sure ain’t no surprise.” According to the band’s autobiography, Walk This Way, the song was inspired by the L.A. Riots, and dovetailed into a larger reflection on racism, equality, and more taboo subjects like unprotected sex and cross-dressing. Steven Tyler drew upon this complexity in the music video, where he appeared naked with half of his body painted black.

Despite all this, “Livin’ On the Edge” affirms that the world is still worth living in the line “We could tell ’em no, or we could let it go, but I would rather be a-hangin’ on.” The song would go on to receive critical acclaim upon release, earning Best Rock Performance By A Duo Or Group at the Grammys and a Viewer’s Choice Award at the MTV Music Video Awards.

No artist is more associated with the Los Angeles Riots than Ice Cube. His 1991 masterpiece Death Certificate is seen by many as a precursor to the riots, with references to police brutality, drug dealing, and racism towards Korean Americans in California. This political mindset continued into The Predator, which was released in November of 1992 and proved to be Cube’s most commercially successful album to date. Several of the tracks set their focus on the L.A. Riots, from “When Will They Shoot?” to “Who Got The Camera?“, but the one that proved most impactful was “We Had To Tear This Mothaf*cka Up.”

Build around a gnawing sample, Cube unloads a verbal clip into the policemen that beat up Rodney King and attempted to control the citizens of South Central Los Angeles during the riots: “Not guilty, the filthy devils tried to kill me / When the news get to the hood the n*ggas will be / Hotter than cayenne pepper, cuss, bust / Kickin’ up dust is a must.” A venomous takedown that proves Cube’s place as an all-time emcee.

“Cop Killer” caused a firestorm of controversy in 1992. Though it was recorded prior to the L.A. Riots, the song quickly became a rallying cry against police brutality– to the point where the Dallas Police Association and the Combined Law Enforcement Association of Texas launched a campaign against Sony Records to get the song withdrawn. Dennis R. Martin, the President of the Association of Chiefs of Police, claimed that “Cop Killer” was implicated in “at least two shooting incidents” and that the lyrics of the song were “vile and dangerous.”

Conversely, many saw the song as a prime example of Freedom of Speech. Body Count frontman Ice-T defended his lyrics, explaining that he’s “singing in the first person as a character who is fed up with police brutality. I ain’t killed no cop. I felt like it a lot of times. But I never did it.” The song was eventually withdrawn by Ice-T, but it remains a defining sonic expression of the L.A. Riots. 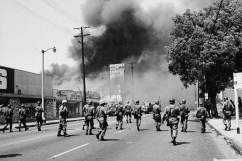 ‘Lost Tapes’ LA Riots Documentary: What Time & Channel Is It on?