Snoop Dogg smokes a joint while performing at the Good Vibrations Festival on February 10, 2007 in Melbourne, Australia. (Photo by Kristian Dowling/Getty)

April 20th, also known as 420, is embraced by pot smokers around the world as “marijuana day.” Its a time of celebration, consumption, and in some cases, political appeals to make marijuana legal in the United States. The most notable locations to celebrate are at Hippie Hill in San Francisco, the Boulder Campus at the University of Colorado, and the Mount Royal monument in Montreal.

But even if you can’t make it to these locations, there are plenty of other ways to celebrate 420. In fact, one of the easiest ways to do so is through a playlist of classic songs that pay homage to the time-honored toke. Since the rise of the counterculture in the 1960s, music has been an artform that’s been unafraid to tackle controversial topics, and getting high has often been at the top of the list when it comes to inspiration. So whether one wishes to cruise through Los Angeles with Snoop Dogg or strut the streets with Rick James, here are 10 classic songs to listen to on 420.

Is there a more obvious weed song that exists? While many artists over the years have coded their love for marijuana through metaphor or coded lyrics, California rapper Afroman opted for the incredibly direct approach in “Because I Got High” (2001). The song explains how the narrator forgot to clean his room, pay his bills, failed college, and much, much more in a series of increasingly unfortunate events. Why? Because he got high, of course.

Afroman’s silly punchlines and melodic rapping style make the song a blast to sing along to, while providing a worthwhile (if exaggerated) message: it’s not good to smoke too much. “Because I Got High” was allegedly written in just a few minutes, and while it failed to see much success upon initial release, the song became a viral hit online, reaching number 13 on the Billboard Hot 100 and appearing on The Howard Stern Show in 2002. It has since become Afroman’s signature song.

Buy “Because I Got High” Here: iTunes

Bob Dylan‘s connection with marijuana and music is historic. It was Dylan who introduced it to The Beatles in 1964, and by the time he released his 1966 masterpiece Blonde on Blonde, it had become a regular part of his creative process. This was especially true on the song “Rainy Day Women #12 & 35,” which, according to Dylan biographer Howard Sounes, required that session musicians Hargus “Pig” Robbins and Henry Strzelecki smoked a “huge amount of marijuana” prior to recording.

Dylan had been inspired to write the song after hearing Ray Charles‘ “Let’s Go Get Stoned,” and was drawn to the doubled entendre of being physically stoned for committing a sin and being stoned on “powerful medicine,” according to historian Clinton Heylin. Dylan affirmed this theory in a 1966 interview withTime magazine, where he said, “in the shifting multi-level jargon of teenagers, to get ‘stoned’ does not mean to get drunk but to get high on drugs… a ‘rainy day woman,’ as any junkie (sic) knows, is a marijuana cigarette.” Needless to say, the public perception of pot was never the same.

While the weed capital of hip-hop may be Compton (more on that later), this chilly banger from Oakland duo Luniz remains one of the genre’s best. The title refers to a common phrase meaning to split the price of a dime bag (a $10 bag of marijuana) with another person: “Kinda broke so ya know all I gots five, is five / Unless you pull out the fat, crispy five dollar bill on the real before its history.” The verses from Yukmouth and Numskull have a spacey, detached feel to them, furthering the stoned aesthetic of the song, while producer Tone Capone weaves a gorgeously dim soundscape made up of samples from Club Nouveau, Audio Two, and Kool & The Gang.

“I Got 5 On It” became a surprise hit when it was released in 1992, soaring to number 8 on the Billboard Hot 100 and going Platinum with over 800,000 copies sold. The song has since been referenced by a number of artists, from Puff Daddy and Jennifer Lopez to Lil Bow Wow and J. Holiday, but none equal the sheer coolness of this original version. A Bay Area classic.

The Beatles have a catalogue of songs that appear innocent on the surface, only to have druggy meaning lurking beneath. This is the case on “She Said She Said” (1966), “With A Little Help From My Friends” (1967), and “Happiness Is a Warm Gun” (1968). But nowhere does this drug connotation sound more joyous, or hopelessly sweet, as it does on the classic song “Got to Get You Into My Life.” Paul McCartney presents the song as if it were to a woman, with lyrics like “I took a ride, I didn’t know what I would find there / Another road where maybe I could see some other type of mind there.”

McCartney explained that the song was actually an ode to pot, “like someone else might write an ode to chocolate or a good claret.” Complimenting the lyrics is an instrumental that sounds right out of the Motown handbook, with brass horns, tambourine, and electric guitar that swoops in and out of the song at any given moment. It’s a whirlwind experience to listen to, and it became one of the group’s personal favorites–particularly for John Lennon, who was notorious for being picky with The Beatles’ catalogue.

Buy “Got to Get You Into My Life” here: iTunes

When The Rolling Stones released their classic song “Brown Sugar” (1971), they were using the phrase as a metaphor for something more risqué (in their case, a variety of taboo topics). When D’Angelo released a song with the same title in 1995, he too was using the phrase metaphorically– only in this case, it was in reference to marijuana. The syrupy cut off of D’Angelo’s debut album treats the substance as if it were a lover, with lyrics like “Brown sugar babe, I gets high off your love / I don’t know how to behave” and the especially suggestive couplet “Always down for a ménage á tois / But I think I’mma hit it solo / Hope my n*ggaz don’t mind.”

“Brown Sugar,” which was influenced by Roy Ayers and featured production from A Tribe Called Quest member Ali Shaheed Muhammad, charted at number five on the Billboard Hot R&B/Hip-Hop Songs chart, and has become one of D’Angelo’s most famous songs.

When it comes to reggae music, marijuana looms large in the lyrics and subject matter. In Rastafarianism, it is used both medicinally and religiously, as a means of achieving greater insight into one’s spirit. And while Bob Marley penned a great many songs about the substance (“Kaya,” “Easy Skanking”), it was ultimately another member of The Wailers, Peter Tosh, who sang the genre’s defining ode. “Legalize It,” released by Tosh in 1976, was a direct response to the Jamaican government and police force, who were avidly against legalizing marijuana.

Needless to say, Tosh was very much for the counter-argument, and felt that citizens, particularly those who had medicinal issues, were entitled to as much. In an interview with NME magazine in 1978, he explained that “We are the victims of Rasclot circumstances. Victimization, colonialism, gonna lead to bloodbath.” Tosh added that one day “Herb will become like cigarettes.” Rarely has political anguish resulted in such a memorably catchy song.

Since the release of The Chronic in 1992, Dr. Dre and Snoop Dogg have become hip-hop’s spokesmen for weed. Even if this reference wasn’t obvious enough in the album title, Dre and Snoop preceded to meld this effects of the drug into the sonic textures of their music. For most rap fans, this is what getting high sounds like. So it comes as no surprise that the iconic duo make the list with “The Next Episode,” off of Dre’s sophomore album 2001 (1999).

Over a menacing guitar riff and a sample of David McCallum’s “The Edge,” Dre and Snoop proceed to grab the mic and drop a series of ad-libs like “Blaze it up!” and Snoop’s “Da-de-da-de-dah” refrain. Still, the song’s most memorable moment comes from Nate Dogg, whose appearance closes things out with the legendary line: “Hey hey hey hey hey… Smoke weed every day.” G-funk doesn’t get much funkier than this.

Buy “The Next Episode” here: iTunes

In a decade defined by its recreational drugs and unhinged artists, The Doors still ranked as one of the most outlandish. Jim Morrison’s haunting croon, mixed with lyrics that tackled murder (“Riders on the Storm“), isolation (“People Are Strange“), and Oedipal complexes (“The End“) among other topics, made the group a lightning rod of controversy for the media. And no incident more embodies this defiance than when The Doors performed “Light My Fire” on The Ed Sullivan Show in 1967.

Told that he could not sing the line “girl we couldn’t get much higher,” due to its drug implications, Morrison agreed and took the stage with fellow members Ray Manzarek, John Densmore, and Robby Krieger (who wrote the song). Then, in front of a national audience, the singer ignored the request and looked right into the camera as he sang the uncensored line– a defining moment in rock and roll history. It’s no coincidence that “Light My Fire” remains one of The Doors’ top songs.

“Sweet Leaf” is a euphemism for, you guessed it: marijuana. Black Sabbath was no stranger to the substance by the time the group released their third album Master of Reality (1971), and the song was actually the first of its kind to include audio of someone coughing from a joint. It’s practice that’s since been used by everyone from Nas to The Notorious B.I.G., but Sabbath guitarist Tommy Iommi got there first, with an additionally wild vocal loop thrown on for good measure.

“Sweet Leaf” only ups the ante from there, with cascading guitar riffs and lyrics that capture the fiery passion Sabbath singer Ozzy Osborne has for getting high. “My life was empty, forever on a down / Until you took me, showed me around / My life is free now, my life is clear / I love you sweet leaf, though you can’t hear.” A seminal stoner anthem, regardless of time or musical preference.

Although Rick James has gone down as a posterboy for cocaine use, there’s little denying that this cold-stone masterpiece is the ultimate weed anthem. It takes the time-honored tradition of equating the drug to a woman, douses it in one of the funkiest instrumentals ever put on record, and the results are pure, sonic bliss. James narrates his romantic entanglement with the titular “woman,” whom he falls head over heels for, and begs for her affection in return. The song perfectly bottles the appeal of Mary Jane, and the way in which it takes James to paradise and rescues him when he’s “feeling low.”

The backing accompaniment echoes James’ frenetic energy, switching between funk, disco and rock. The song peaked at number five on the R&B charts in 1978, becoming James’ first major hit and ushering in a new sound that influenced acts like Cameo, The Gap Band, The Ohio Players, and Prince. Still, no one perfected it quite like James did when he was with Mary Jane. 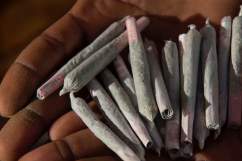