The Compton rapper released his new album DAMN. on Thursday night, and, to be expected fans on social media are freaking out. Lamar’ lyrical acrobatics remains and songwriting remain as sharp as ever, as does his penchant for stoking the political fire with criticisms of Fox News, but it is the song “ELEMENT.” that has most fans theorizing. According to Genius, the combative new song has plenty of subliminal disses for two of Lamar’s old foes: Drake and Big Sean.

“ELEMENT.” opens with a skit from DJ Kid Capri, as he refers to Lamar as “Kung Fu Kenny” and repeats the phrase “I don’t give a f*ck” in a cadence not dissimilar to the way that Drake has been known to spit. As for the phrase itself, many fans believe that it is a thinly-veiled diss at Big Sean’s most successful single, “I Don’t F*ck With You.”

And while these may seem circumstantial by themselves, Lamar goes into attack mode on the song’s second verse, rapping “None of y’all f*ckin’ with the flow yeah, the flow yeah/Years in the making, don’t ya’ll mistake it/I got ’em by a landslide, we talkin’ ’bout races/You know this’ll never be a tie, just look at they laces.”These lyrics bear a passing resemblance to “The Heart Part 4,” which was also theorized to contain shots at Drake and Big Sean.

Lamar continues with the song’s braggadocios demeanor on the line “Mr. one through five that’s the only logic.” This, along with “this’ll never be a tie” have particular relevance when applied to Drake, who remains one of hip-hop’s biggest stars and Lamar’s only viable competition when it comes to “King of Hip-Hop” status. The “Mr. one through five” lyric could also be seen as a response to the recent Drake song “Gyalchester,” which had the Toronto emcee spitting “I know I said top five, but I’m top two/And I’m not two and I got one/Though you had one but it’s not one, n*gga, nah.”

Listen to “ELEMENT.” and the rest of Lamar’s new album below. 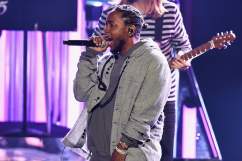