While fans may have to wait until April 14th to get their hands on Kendrick Lamar‘s new album, rest assured that there is some new information to freak out about in the meantime.

According to Complex, a Reddit user discovered a way to pre-order the album on iTunes and reveal the composer credits for each of its fourteen tracks. If you pre-order the album yourself by clicking here, you can do the same thing. And while we’ve yet to be informed of track titles or whether the album will officially be called “ALBUM,” as it is currently billed, there are some thrilling guest artists to be found amidst the production credits.

This includes longtime Lamar collaborators like Anna Wise, Sounwave, Terrace Martin and DJ Dahi, along with some unexpected newcomers like veteran beatmaker 9th Wonder, UK musician James Blake, jazz quartet BADBADNOTGOOD, and legendary rock group U2— although it remains to be seen whether Lamar is actually collaborating with the group or simply interpolating lyrics (fingers crossed for the former). Check out the full list of credits below, where Lamar is credited under his birth name, K. Duckworth.

Check out the video for the only titled track so far, “Humble,” below. 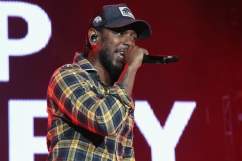