Kendrick Lamar performs at the Coachella Valley Music And Arts Festival on April 23, 2017 in Indio, California. (Photo by Kevin Winter/Getty)

The topic of biting flows in hip-hop has been a popular one as of late, particularly with Drake and the claims thrown his way via rapper XXXTentacion. Now, however, it seems as though Drizzy isn’t the only superstar being faced with these accusations.

On Thursday (April 27th), a video clip surfaced on Instagram that compared “DNA,” the latest single off of Kendrick Lamar‘s album DAMN, to “I Got,” a song by rap artist D. Zign, which dropped almost a year prior. “Whoa,” says the caption, “#KendrickLamar’s new track #DNA sounds a whole lot like this rapper “D. Zign’s” song “I Got… What do you guys think?”

Given Lamar’s popularity and the acclaim he’s received for his lyrical skills, this accusation comes as quite a shock to listeners. D. Zign is keenly aware of the similarities, and based on his reactions on social media, it looks as though he agrees that Lamar “bite” his style. “SO… KENDRICK JUST GONNA STEAL MY SH*T ON HIS “DNA” SONG?” he wrote in a Facebook post on April 20th, “LIKE THAT HUH? #CANIGETONE.”

D. Zign also took his beef to Instagram by writing: “When You Hear Kendricks “DNA” Song And It Sounds Exactly Like D.zign’s “I Got, I Got” Song! The rapper also took a subliminal jab at Lamar by including a picture of one of his hip-hop idols, Jay-Z, looking disappointed.

While the similarities between the songs are tough to overlook, particularly with regards to the chorus, it is worth noting that “I Got” received little attention when it was released in 2015, and has little over 370 views on D. Zign’s Soundcloud page. Did Lamar intentionally bite his style or is it just a coincidence?

Listen to both songs below and decide for yourself. 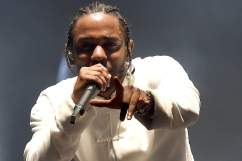