Exactly one week after Harry Styles released his anticipated debut album, another One Direction singer has decided to jumpstart his solo career: Liam Payne.

Payne, 23, has been relatively quiet on the music front since 1D went on hiatus in 2016, and for good reason. He and longtime girlfriend Cheryl Cole gave birth to their first child Bear in March, and Payne has been vocal in how much fatherhood has been the main focus of his life as of late. With the increasing exposure of Styles, however, as well as singles from 1D members Niall Horan, Louis Tomlinson, and even Zayn Malik, it was only a matter of time before Payne got in on the fun.

Last week, Payne uploaded a live video on Facebook that teased his debut solo single, “Strip That Down.” The brief video showed the singer dancing to what is presumably a snippet of the actual song, which will feature a guest verse from Migos rapper Quavo. In a recent interview, Quavo confirmed the collaboration, saying “I just came from a video shoot with my boy Liam from One Direction. Crazy vid, crazy visuals, crazy team, cool guy.” The single is set for release on Friday, May 18th, but at what time? And where can you listen to it?

In what appears to be another page taken from the Harry Styles playbook, Payne will premiere “Strip That Down” on BBC Radio 1 Friday morning. The singer will join host Nick Grimshaw for an interview on his solo career, where he will discuss how the collaboration with Quavo came to be and what he plans on releasing next. BBC Radio 1 will air at 7:00 a.m. BST, which, for those living elsewhere in the world, means 2:00 a.m. Eastern and 11 p.m. on Thursday MST. You can listen in right here or click the link in the tweet below.

? BIG @R1Breakfast GUEST ALERT ?@LiamPayne joins @grimmers FRIDAY 19TH MAY at 7AM to play us his NEW music ?? https://t.co/48RuyzVNDg pic.twitter.com/gqGtbiteOD

According to Just Jared, the lyrics on “Just Strip Down” reflect an artist who’s happy to be out from under the One Direction banner. “You know that I used to be in 1D,” he sings, “Now I’m out free.” And while it has yet to be confirmed when Payne will release a full album, a source close to the singer told The Sun that he “wants his solo music to sound like a mix between Justin Bieber and Drake. It’s definitely not going to be a hip-hop album. He’s worked with so many producers and artists.”

These artists have gone on to include superstars like Drake, Little Mix, and Ed Sheeran, whom The Sun reports is allegedly co-writing Payne’s next single. It definitely sounds like a departure from the folk-pop that Horan has been making, the dance music that Tomlinson has attempted, or even the nostalgic rocker that Styles has turned into. Are you excited? 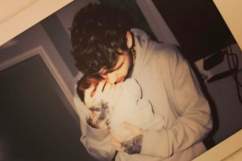 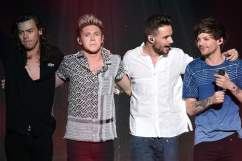 One Direction Reunion Rumors: 5 Fast Facts You Need to Know