Drake and Kanye West have had a long, complicated history together, and now it looks as though they’ve become rivals. Drake released a song on Friday afternoon called “Duppy Freestyle”, and in it, he takes aim at West,  the falling out they experienced in 2017, and some of the recent controversial statements that West had made in the news.

Drake opens the freestyle by talking about West’s “nerve” and audacity”, before addressing West’s longtime collaborator and supporter, Pusha-T. “What do you really think of the n**ga that’s making your beats? I’ve done things for him I thought he never would need.” Drake then mocks some of West’s most recent song titles, including “Father Stretch My Hands“, “30 Hours“, and his own song “Pop Style“, on which West guested but was later removed from in 2016.

He raps “Father had to stretch his hands out and get it from me, I popped style for 30 hours and then let him repeat.” Drake is known for his subliminal diss records, to the extent that many his targets have been up for debate, but there is no room for interpretation here, between the song titles and a specific mention of “Ye” towards the end of the song.

Listen to ‘Duppy Freestyle” below.

Drake has open to discussing his issues with West in the past. The two rap stars had plans to release a collaborative album in 2017, but it was later shelved due to West’s allegedly volatile behavior. “I’m not really sure what he’s referring to half the time,” Drake said in an interview with DJ Semtex, “I went from being … like working on a project with him, to him sorta publicly s**ting on me and DJ Khaled for being on the radio too much.”

“I don’t really even understand the point you’re trying to make,” added the Canadian rapper, “But whatever it is that you’re going through, I accept it, I don’t respect it at all. You know, because I feel like me and Khaled are just good people. I’m not sure why we’re the target of your choice that you made that night. And yeah I accept what you’re going through, and I just go and continue working on my own thing.” Listen to the full interview below.

Elsewhere on “Duppy Freestyle”, Drake raps “Who gassed you to play with me? Man you made this s**t as easy as ABC”, and “I’ve really shouldn’t have given you none of my time, cuse you older than the n**ga you runnin’ behind, in reference to both West’s and Pusha’s age.

All this may come as a surprise to fans, as recent news seemed to suggest that Drake and West had restored their friendship. They collaborated on the song “Glow“, and in March, HipHopDX reported that Drake was among the many artists (Travis Scott, Nas, The-Dream) who traveled to Wyoming to work on West’s upcoming album. The Canadian rapper was said to have brought a crew with him that included a sound engineer, a songwriter, and his personal photographer Theo Skudra.

@TeamKanyeDaily Drake’s photographer, Theo just posted this on his insta story. Drake also mentioned in Ninja’s stream last night that he needs to leave soon to pack for a flight? pic.twitter.com/lZilkI2ukR

West has yet to respond to the “Duppy Freestyle” diss, but Pusha-T, who has recorded several Drake disses over the years, including, “Don’t F**k With Me“, “Exodus 23:1” and the recently released “Infrared“, has acknowledged the song on Twitter. He included a link to the song and a comment that read “Send the invoice for the extra 20…” in reference to one Drake’s punchlines. 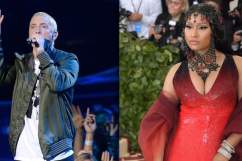