Some 15,000 nile crocodiles are on the loose after escaping from a farm in northeast South Africa.

The rascally reptiles busted out of Rakwena Crocodile Farm in northeast South Africa after floods caused the Limpopo River levels to rise, according to RT.

The farm’s owners were forced to open the gates of the crocodile’s habitat in order to allow the flood waters to drain away. The plan backfired when the entire herd of crocodiles escaped once the pen was opened. Authorities have issued an order to locals to stay inside their homes and avoid approaching the crocodiles. The animal safety experts told locals to call them if they spot any of the reptiles.

Since then, reptiles have been spotted all over the local area, including at a nearby rugby field at a school. 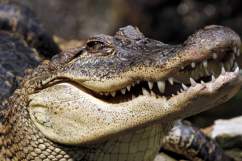 Man Chomped by Crocodile While Taking Crap in River

Rakwena’s Zane Langman told the local paper Beeld that he has already found a thousand crocs near his farm, but there are still “more than half” of them missing. Langman said the best time to catch them would be at night because their eyes glow red in the dark, making them easier to find.

Most commercial croc farms breed the animals for their skins — used in handbags, shoes and belts. There is also a small market for crocodile meat.

Nile crocodiles are considered the largest crocodiles in Africa and the second largest in the world. They can grow up to 5 meters long, run up to 8 mph and swim at 22 mph. The meat eaters pose a serious risk to humans.