The Boy Scouts of America is reevaluating its longstanding ban on gay members and allowing local organizations to decide on their own policy. After years of fighting against calls to drop the ban, it would be the first time the 103-year-old institution openly accepted gay members and leaders.

“This would mean there would no longer be any national policy regarding sexual orientation, and the chartered organizations that oversee and deliver Scouting would accept membership and select leaders consistent with each organization’s mission, principles, or religious beliefs,” Deron Smith, a spokesman for the Boy Scouts of America, said in a statement.

Smith added that the Boy Scouts would not assign gay members to gay-friendly organizations, but rather allow members and parents to choose units that best meet the needs of their families. The proposal, which was the result of a “a longstanding dialogue within the Scouting family,” rather than a specific incident, will be discussed when the Boy Scouts’ National Board meets next.

It was only in July that the Boy Scouts stood by the ban, stating that the ban “reflects the beliefs and perspectives” of the organization. In October, Ryan Anderson was denied the honor of Eagle Scout status after coming out as gay. Anderson spent 10 years as a Boy Scout working toward the award. 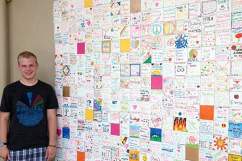 The Boy Scouts of America is one of the largest youth organizations in the United States with 2.7 million members and over 1 million adult volunteers and prides itself in training its youth in responsible citizenship, character development, and self-reliance through participation in a wide range of outdoor activities, educational programs

Loading more stories
wpDiscuz
0
0
Would love your thoughts, please comment.x
()
x
| Reply
The action would lift a a longstanding ban on gays in the organization's 103-year-old history.