A horse rapist is on the loose in Florida!

Abby Conder, who breeds, shows and sells miniature horses, says that since May, her mini-horses have been under attack. One of her horses “had been raped both by a man and by several objects. She was so hematomed on the back and so bloody, that she looked like they put her whole bottom through a garbage disposal,” as reported by Tampa Bay’s News 10.

Bodily fluids were found inside the horse by the vet, but Marion County Sheriff’s officers told Conder that they need to catch the man in the act.

Conder says she bought a guard dog, but he was beaten to death, so they set up surveillance cameras with a live Internet feed. On Saturday, they caught a man checking out the horses and then bringing one to a fence, tying it up and abusing it.

Conder says that her horses “don’t know to fight with a person” and would go with anyone. Then she sends out this warning: “I’ve never shot a gun in my life, but if I catch this man in this barn taking out another one of my horses and he’s gonna traumatize this young horse and hurt her internally like he has my other horses, I will come down and I will kill him.”

Florida passed laws in 2011 against having sex with animals, which is shocking in its own right. So, Florida is basically a breeding ground for sick bastards these days. 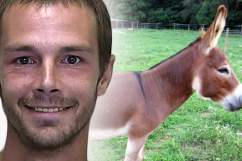 Man Busted for Sex with Miniature Donkey, Has Been Banging Horses for 13 Years