Jill Kelley, Tampa socialite and the other other woman from the Petraeus scandal, broke her three-month silence and gave an interview to The Daily Beast.

She sought to correct inaccuracies that were released during the fallout from the exposure of General Petraeus’s affair with Paula Broadwell.

When asked what she wants everyone to know about herself, she says: “I’m a dedicated mother, a loving wife. We have a very happy, close family. I support the troops. I take pride in feeding the homeless in our community.” Good for her.

Here are 10 revelations — some juicy, some meh — that came out of her interview:

1. Broadwell’s “Terrifying” Emails Weren’t About Petraeus At All
Kelley claims that Paula Broadwell sent about 10 anonymous emails to an account shared by her and her husband, threatening blackmail and extortion, but did not warn her to stay away from General Petraeus. She also says that she didn’t even know that they were from a female, but she laments her and Broadwell being pegged as “romantic rivals.” So much for the cyber catfight.

2. Kelley Compares Herself to Nancy Kerrigan


While she remembers being “devastated” by the swarms of reporters outside her house during her daughter’s 7th birthday party, she compares her story to that of Nancy Kerrigan, that figure skater from the ’90s clubbed in the knee with a tire iron by the ex-husband of fellow American skater, Tonya Harding. What a contemporary reference.

3. The Shirtless FBI Agent Was Harmless


Kelley says, “I knew I was being stalked” and did what anyone would when they were being threatening by alerting someone she trusted. This person happened to be FBI agent Fred Humphries, who happened to have sent Kelley a shirtless picture of himself in the past. Kelley says the photo was just a joke, and was sent to many people, including his wife. Old news at this point, but first time hearing it from Kelley.

4. She Exchanged Hundreds, Not 30,000 Emails with General John Allen
Both Allen and Kelley deny that they had an affair, and she was enraged when various media sources exaggerated her relationship with the General and claimed there were more than 30,000 emails exchanged between them. She contradicted these reports and estimated the emails totaled somewhere in the hundreds, and were so innocent that they were sent to the account she shares with her husband, with General Allen’s wife often included in the exchanges.

5. Charges Against Broadwell Were Dropped When Kelley Declined to Press Charges
Though it has been reported previously that federal prosecutors declined to file charges against Broadwell, it was not reported that they closed the case after asking Kelley whether she wanted to press charges. Prosecutors could have continued, but Kelley would have likely been the chief witness. 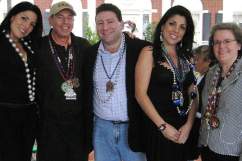 6. The Media Quoted Strangers Who Claimed to Know Her
Kelley also expresses her sadness at the media circus that developed around her, angered by the “lies and half-truths” reported, including comments from a hairdresser who said Kelley was a customer and friend, as well as the errors on her Wikipedia page.

7. Her New Publicist Urged Her to Break Her Silence
Kelley is pretty angry with the media for portraying her in a less than desirable manner, but her former’s publicist encouragement to stay silent left them with little firsthand information. Her new spokesman has her telling her side of the story.

8. Allen and Petraeus Became Friends With Her Sister

General Petraeus and General Allen both wrote letters to the court on behalf of Kelley’s twin sister Natalie to help her regain custody of her child. Kelley doesn’t find this strange at all, saying that Natalie had become friends with the two generals as well.

9. The Kelleys’ Financial Difficulties Were Inaccurately Reported
Some reports have shed light on the financial struggles the Kelleys have faced, but she claims the media “made it look like I’m throwing parties yet I’m broke, made it look like we’re deadbeats.”

10. She Didn’t Initiate Talks to Parlay Her BS Title of “Special Consul” into $80 Million
South Korea removed Kelley’s title of “Special Consul” — which she invoked in 911 calls when reporters showed up at her home — after New York businessman Adam Victor claimed publicly that she asked for an $80 million commission to use her public image to help him acquire an energy contract with South Korea. But Kelley now says Victor is the one who approached her, and she’s the one who cut off the talks.