Thursday night, we witnessed Lance Armstrong officially admit to doping with all sorts of performance-enhancing drugs (EPO, Cortisone, testosterone and blood doping transfusions). We also learned that the dim wit had to literally research the meaning of the word “cheating” in the dictionary to somehow reach the conclusion that he wasn’t doing it. It was quite riveting. 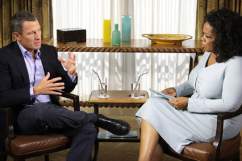 The first part of the interview with Oprah Winfrey was aired to the world at 9 p.m. ET on the OWN Network as well as broadcasted simultaneously on Oprah.com. The second part of the interview aired tonight–same time, same place–where Oprah dug into more personal issues with Armstrong, rather than the details of the scandal. We learned that the ex-cyclist wants to compete again, though not in the Tour de France, and that he is actually a human being when he choked up talking about the time his son stood up for him. Check out the live coverage below.

[10:00 p.m.] Oprah: Moral of the Story is: The Truth Will Set You Free
Oprah concludes the interview elegantly with stating that the moral of the story is that “the truth will set you free.” Well put, Oprah. Well, that’s a wrap! Now we can all move on with our lives. What’s next for Lance? Do you actually think he will ever bike again in his life?

“I can’t lose my way again. That’s the biggest challenge of my life- not to slip up again.”- @lancearmstrong via @oprah #OwnTV Part ll

Have you lost everything?” “And I’m going to give you a #.” That was a $75 million day.” @ownviewers #owntvA quick, concrete answer

[9:36 p.m.] Armstrong’s Son Stood Up for Him
Here come the tears. Armstrong tells the story of how his son defended him against other kids that accused his dad of cheating. While tearing up as Oprah sits by looking as if she couldn’t give a sh*t, Armstrong tells Oprah that he told him that it was true and to not stand up for him anymore.

[9:20 p.m.] His Tour de France Jersey Tweet was More Defiance
Just after Armstrong was stripped of his seven Tour de France titles, he posted a tweet lying on his couch under his Tour de France jerseys. Oprah asks, “So was it just you being your cocky, arrogant jerk self when you tweeted that photograph of yourself? What was that?” He replied that it was just more defiance and he actually thought it was a good idea at the time.

[9:18 p.m.] He Wants to Compete Again
Oprah asks if Armstrong is doing the interview so he can compete again. He replied that he isn’t doing the interview because of that, but “Hell yes, I am a competitor.” Oprah’s reaction is rather hilarious when she gives him a look of disbelief and asks him, “Even biking?”

[9:07 p.m.] He Hopes Livestrong Will Live On
Lance Armstrong tells Oprah he hopes the Livestrong Foundation will live on and continue inspiring others. Oprah shares an e-mail she received from a friend after she found out Oprah was going to interview Armstrong. The friend said that they heard he was a jerk, but despite that, he helped her through her own troubling times when her son was diagnosed with Leukemia and that she will always root for him.

[9:05 p.m.] Lance Armstrong’s Most Humbling Moment was When He was Asked to Step Down as Livestrong Chairman
Oprah opens up part two of the interview asking what Lance Armstrong’s most humbling moment was during the allegations. He said it began when he got the call that Nike was pulling out of sponsorship and then all the others. But his MOST humbling moment was when Livestrong called him and asked him to step aside as chairman.

Loading more stories
wpDiscuz
0
0
Would love your thoughts, please comment.x
()
x
| Reply
Check out part two of the Lance Armstrong Oprah interview and the live coverage to the conclusion of the event.