The Super Bowl hype has begun, and the excitment over next Sunday’s game has reached a fever pitch. Buffalo wings will be consumed, beers will wash them down and plenty of bandwagon/casual football fans will offer their unsolicited insight during the festivities. After such a draining day of football, most working folks want to take a load off the next day to nurse their hangovers and lament their gambling losses.

If it reaches 100,000 signatures by February 23, the Obama Administration will have no choice but to give some serious consideration to this request. So far, 8,135 signatures have been counted. C’MON FOLKS, GET ON THIS!

We got the chance to chop it up with Josh Moore and find out how and why he launched this historic petition.

Elton Jones: So what made you decide to start this petition?

Josh Moore: This is something my friends and I have been talking about for years. It seems so obvious it’s silly. So I was at the whitehouse.gov site for this other, more important petition when it came to me that this would be the perfect venue to push for a Super Bowl Monday holiday.

EJ: Have you ever experienced a Super Bowl hangover?

JM: Yes. I run a fantasy football information & rankings site called 4for4.com. While this is a fantastic way to waste away the years of my youth, it does mean I am working seven days a week from August through the Super Bowl. The Super Bowl is a culmination of hard work for me, and generally results in a pretty dire Super Bowl Monday.

EJ: What are some valid reasons for making this Super Bowl holiday official?

JM: Football, and the Super Bowl specifically, brings together the American people like no other cultural event of our time. Not only would a Super Bowl Monday holiday embrace this cultural event and promote camaraderie among Americans, it would also do away with one of the least productive work days of the American year. On top of all that, Americans are already working more hours per year than our brothers and sisters in Germany, Austria, Sweden, the United Kingdom, Australia, Canada, Japan and many more countries. Super Bowl Monday is one small way we can bring back the balance to work and life in this United States of America. 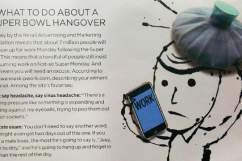 EJ: Did you want the Obama Administration to seriously say yes to a fully working Death Star?

JM: I would prefer national resources be poured into a 1981 DeLorean with an after-factory flux capacitor.

EJ: What team are you rooting for at this year’s Super Bowl?

JM: I’m rooting for a tie, as always.

EJ: If you could say one thing to the folks at the White House, what would it be?

JM: Appreciate all your hard work. Hurray up and make Super Bowl Monday a national holiday so you can turn your attention to getting big money out of politics!

Loading more stories
wpDiscuz
0
0
Would love your thoughts, please comment.x
()
x
| Reply
The man behind the petition to make the day after the Super Bowl a holiday gives us a few minutes of his time.