A Midtown Manhattan building was evacuated after police found a possible meth lab in one of the apartments.

A Manhattan apartment building on 54th street was evacuated on Monday after NYPD found what they believe to be a meth lab inside one of the apartments, reports NBC 4 New York. Police responded to calls about a dispute inside of the building where neighbors also complained about about a toxic smell burning their eyes, leading them to the discovery of the lab.

The four-story building was evacuated and a bomb squad was dispatched to deal with the possibly hazardous materials. About 35 people were forced to leave their apartments located at 431 West 54th in Hell’s Kitchen.

A middle-aged man is being questioned by the police. Kevin Law, 31, who has lived in the building for three years, says the man in question is a shareholder of the co-op building and owns his apartment.

Well, let’s not jump to conclusions, guys. Isn’t it possible that this guy could just happen to really love chemistry? Ha. 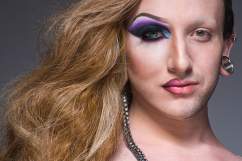 Meth-Dealing Priest Suspended for Cross-Dressing & Having Sex in Rectory