Brazilian police officers have arrested three people in connection with the horrific Brazilian nightclub fire that killed 234 people on Sunday morning, including the lead singer of the band, which used pyrotechnics in its performance.

BBC reported that police took into custody the owner of the Kiss nightclub, the club’s security chief, and a member of the band Gurizada Fandangueira. All are being held for questioning, and the club’s co-owner is also being sought.

The accordionist for the band died in the blaze. Danilo Jaques reportedly escaped the fire but returned to the club to retrieve his instrument, which led to his death. Marcelo Santos, the lead singer of the band, was arrested today while attending the wake of his deceased bandmate.

If the regrettable loss of our friends, fans, and Danilo is not enough, now they have arrested Marcelo de Jesus dos Santos and Luciano Gf. All because they want to find an easy way out, to patch things up, while with the authorities (big fish) nothing happens.

Rodrigo Martins, the guitarist for the band, spoke to The Daily Mail and about the incident:

It might have happened because of the Sputnik, the machine we use to create a luminous effect with sparks. It’s harmless, we never had any trouble with it. When the fire started, a guard passed us a fire extinguisher, the singer tried to use it but it wasn’t working.

More than 50 deceased victims of the nightclub fire are being buried today. Brazilian authorities released the names of more victims, after bringing down the total death toll down from 245 to 234. 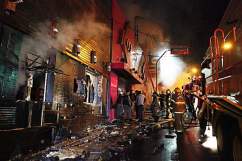 More than 100 victims of the nightclub fire are being treated for smoke inhalation.

BBC Rio correspondant Julia Carneiro attended a collective wake for the dead victims at a gym located in Santa Maria. BBC Brazil News Editor Gary Duffy reported from Sao Paulo and noted that “the national sense of loss is profound.”

Three days of national mourning have been declared by Brazil.

Loading more stories
wpDiscuz
0
0
Would love your thoughts, please comment.x
()
x
| Reply
The singer was arrested at the wake of his dead accordion player. The band's pyrotechnics display is suspected of sparking the blaze, which killed 234 people.