Everyone knows Tom Cruise kicked a lot of alien ass in War of the Worlds, but a new book about the Church of Scientology says he’ll save the world from aliens in real life too — and that he’s No. 3 in the organization.

Sure, he’s a big-time movie actor, but what’s a movie here and there compared with eternity?

In Going Clear: Scientology, Hollywood & the Prison of Belief writer Lawrence Wright discusses Cruise’s status in the church, and apparently the Mission: Impossible star is a lot higher up than anyone might have imagined.

Here’s what you should know about the book and its revelations about Cruise’s life in Scientology.

1. Cruise was Introduced at 23 by Girlfriend Mimi Rogers

Cruise and Rogers were married in 1987, but he kept his initial participation low-key. He began undergoing “auditing,” or being asked about every aspect of his life, a process that took him several years before the church realized that of all the celebrities it attracted, like John Travolta, Kirstie Alley or Kelly Preston, Cruise’s fame was growing and he was the church’s biggest star of all.

2. He Was Trained by Church No. 2 David Miscavige Himself

Cruise came to believe that he was No. 3, behind only founder L. Ron Hubbard and Miscavige, the church’s Chairman of the Board. It was a rapid rise for a guy who claimed to be a “functional illiterate” who suffered from dyslexia. However, Cruise had that charisma that led him to the top lead role in 1983’s Risky Business, followed by playing Maverick in Top Gun. When you’ve got that kind of money, the guys at the top listen. And Miscavige took it upon himself to make sure Cruise was a true believer.

Miscavige wanted to mainline Scientology, and Cruise, as a rapidly rising star, was his best chance. And the Church got more of Cruise’s loyalty when in late 1989, he became obsessed with Nicole Kidman, who was cast in Days of Thunder. Unfortunately for Cruise, he was still married — and Miscavige got Rogers to understand that the church was bigger than her and Tom — and the church needed Cruise.

Miscavige began trying to convert Kidman, but he identified her as a “Potential Trouble Source,” says the book. She not only was a Catholic, but her father was a psychologist, and the church believes psychiatry controls individuals through drugs and brainwashing.

5. Kidman Never Caught Up with Cruise

She never really was interested, Wright writes, but Cruise was already up to the “Operating Thetan III” level. It’s kind of complicated, but it seems Scientologists think aliens have destroyed the planet before and the religion must reclaim the Earth and rescue humans. Seems like an OTIII person has gotten rid of his own aliens and can fight other ones. 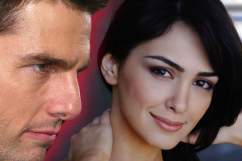 6. The Church Got Rid of Kidman, Too

By 2001, Cruise wanted a divorce. Kidman was pregnant, and two months after they separated, she miscarried. In “Going Clear,” Wright claims she wanted DNA from the fetus kept to prove Cruise was the father and protect herself from claims the church would make. Eventually, though, the divorce was finalized, but the church turned Nicole and Tom’s adopted children against her.

7. Cruise Came to Believe He Has Special Powers

Cruise wasn’t just becoming a movie star, but he became a religious leader with moral authority. But he also came to believe he was equipped in helping a woman suffering postpartum depression, or could cure addicts.

8. Cruise Uses His Celebrity To Lobby for Tax Breaks

Wright wrote that Cruise lobbied Bill Clinton and former British Prime Minister Tony Blair to pursue tax breaks for the church, which reportedly has at least $1 billion in holdings.

9. The Church Hooked Up Cruise with His New Wife


Cruise was getting lonely, so Miscavige put church members to work to help out. Cruise held auditions at the Celebrity Centre, supposedly casting for his next “Mission: Impossible” role. He invited Lindsay Lohan, Jessica Alba, Kate Bosworth, Scarlett Johansson and Jennifer Garner for “auditions.”

10. The Church Arranged His First Date with Katie Holmes
Within two weeks of their first date, Katie moved in with Cruise and cut off all contact with friends and representatives, and she was shadowed everywhere. Meanwhile, Cruise was still climbing…and even after Holmes broke free and took their daughter with her, he kept climbing in the church.

But is the world really safe from aliens — and are women safe from Tom Cruise? He’s still young enough to remarry, so maybe this time around he’ll find a fellow alien fighter to join in his struggles.