CCTV cameras in Madrid caught this dramatic footage of a policeman rescuing a woman after she fell onto the subway tracks. Bystanders frantically called for help until a heroic police officer arrived, sprang into action and pulled the woman off the tracks and onto the platform.

Unlike the horrifying story of the man who was pushed into a subway train in New York last year, this one ended on a courageous note. 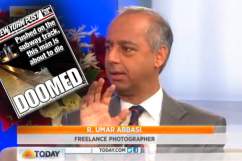 WATCH: Photographer in Fatal Subway Push: Nothing I Could Do

The incident took place at Madrid’s Marques de Vadilla metro station when a 52-year-old woman fainted and fell head-first onto the tracks. Luckily, the bystanders were able to grab the attention of the subway driver and stopped the train. A 38-year-old off-duty officer came to the rescue and pulled the woman off the tracks as soon as he saw her on the ground. A doctor, who was there at the station during the accident, attended to the woman, who was unharmed.

The footage was caught by security and was posted online. This comes after a similar incident that took place in New York last year, when a man was pushed onto the tracks and no one was able (or willing?) to rescue him on time. A New York Post photographer took a snapshot of the guy trying to escape. The photographer, R. Umar Abbasi, defended his actions on the Today Show after scrutiny was thrown at him for doing his job rather than saving a life. Perhaps we should take a few pointers from Spain?