After weeks of hearing about Lance Armstrong admitting in an interview with Oprah Winfrey to doping during his cycling career that won him seven Tour de France titles, we FINALLY got to see it for ourselves Thursday night. The interview took place in a dowtown Austin hotel and was aired to the world on the OWN Network and streamed live on Oprah.com. The interview was broken up into two parts, the first of which we got to see Thursday. Here’s what Lance Armstrong told Oprah in part one of the highly anticipated interview.

Oprah started off the interview with Lance Armstrong with what everyone already knew and yet, still wanted to hear. Armstrong actually admitting to the fact that he used performance-enhancing drugs during his cycling career. And admit he did! Armstrong confessed to using Erythropoietin (EPO), Cortisone, Testosterone and blood dope transfusions and he used the drugs during all seven Tour de France wins.

2. He Doesn’t Believe He Would Have Won Without Doping
Armstrong told Oprah that he doesn’t think it would have been possible for him to win the seven Tour de France titles if he didn’t dope.

3. The Ex-Cyclist Called Himself a “Bully” and an “Arrogant Prick”


The ex-cyclist confessed that he was a “bully” to his teammates, lied under oath and repeatedly smeared people who stood up against him.

“I was the leader of the team, the leader of any team leads by example and there was never any direct order or directive that you have to do this,” Armstrong said.

He just pressured his teammates because there was a “level of expectation.” When Oprah asked Armstrong what his flaw was that made him risk it all, he responded that it was his ruthless desire to win.

“I think just this ruthless desire to win, to win at all costs. It served me well on the bike, it served me well during the disease but the level it went to is a flaw,” he said.

He also described his personality back then as “defiant” and called himself an “arrogant prick.”

4. Armstrong Didn’t Feel Like He Was Cheating
The worst part about the whole thing is that Lance Armstrong didn’t even feel as if he was cheating. To convince himself of this, he even went to dictionary to define “cheating.” The definition he got was “to get an advantage over a rival or a foe.” He came to the conclusion that he wasn’t a cheater because everyone else was doping as well, so he didn’t have an advantage over anyone. It was the culture of the sport. What about the few ethical cyclists that actually competed with their honest blood, sweat and tears? What about them, Lance?

5. He Called the Few Cyclists Who Didn’t Dope “Heroes”


The few cyclists that didn’t dope, Armstrong called them “heroes” and that he never considered them as “suckers” for not taking part in the wide-spread doping culture. 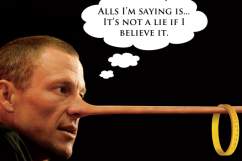 6. He Didn’t Donate to the International Cycling Union as a Cover Up
The International Cycling Union, or the UCI, is “the world governing body for sports cycling and oversees international competitive cycling events.” The body issues racing licenses and enforces disciplinary rules. When former cyclist Floyd Landis admitted to using performance-enhancing drugs throughout his career, he alleged that the UCI accepted a money bribe from Armstrong to cover up an EPO test that came back as positive after the 2001 Tour de Suisse.

Armstrong addressed the issue and told Oprah that he didn’t donate the money to the UCI as a bribe. He said the organization simply called him up and asked him for a donation. Since he had the money, he donated it.

7. Dr. Michele Ferrari Was Definitely Involved in the Doping


Michele Ferrari is an Italian physician and cycling coach that worked with Lance Armstrong during his career. In 2004, Ferrari was accused of aiding bicycle racer Filippo Simeoni in doping. Armstrong testified in court and denied that the physician prescribed him doping drugs or aiding him to cheat in anyway. He denied that he was a cheater. In the interview with Oprah, Armstrong fully admitted that Ferrari was definitely involved in his doping.

8. Armstrong: “I Never Called Betsy Andreu Fat”
Betsy Andreu is the wife of former cyclist Frankie Andreu. The couple testified against Armstrong saying that they heard Armstrong admit to cancer doctors that he doped with EPO, growth hormone and steroids in 1996. He also apparently said some vicious things about Betsy. In an interview with CNN she talked about Armstrong.

This was a guy who used to be my friend and who decimated me. He owes it to me to come clean, he owed it to the sport.

Betsy accused him of calling her crazy and fat. Armstrong admitted to calling Andreu crazy, but he says he never called her fat.

9. Armstrong Will Spend the Rest of His Life Apologizing to People


Lance Armstrong realizes that he will forever be remembered by this scandal.

“I will spend the rest of my life trying to earn back trust and apologize to people,” Armstrong told Oprah.

10. Part Two of the Interview Will Air Tomorrow
Tune in tomorrow for the second and final part of the interview where Armstrong answers to his “Livestrong” bracelet supports and whether or not he did the interview as a way to get back into the sport.

Loading more stories
wpDiscuz
0
0
Would love your thoughts, please comment.x
()
x
| Reply
We finally got to hear for ourselves what we already knew; Lance Armstrong doped. Check out what Armstrong said during the Oprah interview that everyone's been talking about.