Alberto Morales, the serial-rapist fugitive who made a Hollywood escape during a cross-country prison transport, was killed Friday in Texas after a four-day manhunt.

KENS5 reports cops shot Morales just before midnight during a foot pursuit near Grapevine, Texas — just 2.6 miles north of the Walmart parking lot where he escaped four days prior.

Police probed a burglary that involved the theft of men’s clothes and suspected Morales was involved. They narrowed the manhunt’s focus to the area near the burglary and, utilizing a police helicopter, tracked him down in the woods.

Local police spokesperson Sgt. Robert Eberling said Morales was killed “as a result of the fugitive’s actions.” He went on to say:

At this point, as far as the investigation’s concerned, Mr. Morales was shot and is now deceased. We’re really relieved for the citizens of this community. We knew we had a dangerous individual out there on the streets, and he was capable of being extremely violent.

Morales was being transported from Florida to Nevada on Monday. He behaved so erratically on the first leg of the flight that his transporting officers were forced to rent a car in Texas and continue the journey on land — apparently part of the fugitive’s well-orchestrated plan.

During a pit stop at a Walmart in Grapevine, Morales stabbed Miami-Dade County Detective Jamie Pardinas with a broken pair of eyeglasses and escaped.

By the time he was killed, Morales had freed himself of his shackles and was wearing a jogging pants and part of his prison jumpsuit.

Cops wouldn’t say if he was armed.

Read more about Morales and his escape here: 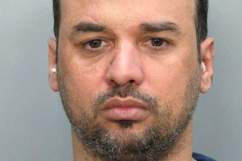 Read More
Alberto Morales, Cops, Crime, Florida, Manhunt, Police, Sicko, Texas
The fugitive escaped while being transported cross-country — in a well-orchestrated plan that involved freaking out on the first leg of his flight.