But the truth is they have no idea where he is.

We can’t say for certain he’s not in the area.

Big Bear is a ski resort in Southern California. It’s about 70 miles east of San Diego, where Dorner was mistakenly thought to be held up in a motel yesterday.

Yesterday Dorner’s Nissan Titan truck was found in Big Bear, burned out and driven off of a cliff. Police found tracks nearby and began a search that included SWAT and air support.

Police haven’t said anything about why Dorner abandoned his vehicle, why he went to Big Bear or what mode of transport he’s currently using.

Last night, a snowstorm hit the area but the search continued, with no luck. Cops followed tracks discovered near the truck, but they don’t know if the footprints were left by Dorner, and the trail was a dead end. 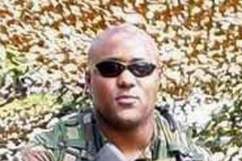