UPDATE 11 p.m. EST: Chris Dorner is dead, according to KTLA:

#BREAKING: LAPD Source Confirms to KTLA That Body Found in Burned Cabin is That of Fired LAPD Officer Chris Dorner 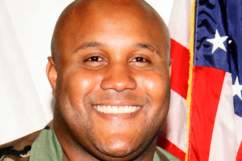 UPDATE 9:59 p.m. EST: A body believed to be Dorner’s is dead inside the the burned cabin. There has been no official confirmation that the deceased person is indeed Christopher Dorner.
—————–

UPDATE 7:20 p.m. EST:
According to television reports, the cabin in which Chris Dorner has been holed up is now “fully engulfed in flames” and there is ammunition exploding inside the cabin.

Meanwhile, one shot was fired.

At scene of Dorner manhunt, reporter says cabin is on fire – from @cbsla broadcast cbsloc.al/tEfhgT

The fire may have been sparked by tear gas fired into the cabin. Dorner recently was spotted purchasing scuba equipment, and it’s thought he may have intended to used the air tanks to survive a situation such as this one.

And there are reports that the cabin has a basement.

Christopher Dorner, the scorned ex-cop whose revenge-killing spree sparked the biggest manhunt in California history, is holed up in a cabin in the San Bernadino mountains after an intense shootout that wounded two officers, killing one.

The fierce gun battle played out on live TV (hear the recording below).

Preliminary information indicates that Dorner had invaded a home and tied up a couple, but it’s unclear how long he had been at that cabin. (Cops found Dorner’s burned out truck on Thursday in Big Bear.)

One of the hostages reportedly got loose and called 911. Dorner reportedly took off on foot, then stole a white Dodge pickup truck. Reportedly, he engaged in a car-to-car gunfight with Fish & Game officers.

Dorner reportedly crashed the truck and continued on foot, and barricaded himself in another cabin, some eight miles from the cabin where he held the hostages.

He engaged in massive shootout near Glass Road, off Highway 38, in an area known as Angelus Oaks, shooting two sheriff’s deputies.

According to an L.A. Now source:

The source said one deputy was wounded as Dorner fired out of the cabin and a second was injured when Dorner exited the back of the cabin, deployed a smoke grenade and opened fire again in an apparent attempt to flee. Dorner was driven back inside the cabin, the source said.

Here’s the official statement from the San Bernadino sheriffs:

On Tuesday, February 12, 2013 at 12:22 p.m, deputies working the Big Bear area search for Christopher Dorner responded to the 1200 block of Club View Dr. for a reported stolen vehicle. The reporting party said the suspect took their vehicle and described the suspect as looking very similar to Dorner. Deputies immediately began a search on the ground and from the air for the vehicle.

The vehicle was located at Hwy. 38 and Glass Rd. The suspect fled into the forest and barricaded himself inside a cabin. A short time later there was an exchange of gunfire between law enforcement and the suspect. Sheriff’s SWAT is onscene.

Two law enforcement officers are being airlifted to a local hospital with unknown injuries.

CBS’ Carter Evans was reporting live-via-phone from the scene of the schootout.

Gunshots could be heard in the background of Evans’ report, and a sheriff’s officer was heard telling him “GET THE F*CK OUT OF HERE!” You can hear the gunfire in this news report:

Dorner remains holed up in a cabin in a standoff with authorities, who have the cabin surrounded. Dorner, a Navy-trained marksman, is heavily armed and not expected to go down without a fight. In fact, most people expect him to fight to the death, in light of this passage from his infamous manifesto, which he posted to Facebook:

Unfortunately, I will not be alive to see my name cleared.

Loading more stories
wpDiscuz
0
0
Would love your thoughts, please comment.x
()
x
| Reply
It looks like Dorner's rampage is over, but there's no official confirmation of his death.