Cop-killer Christopher Dorner is dead, having apparently killed himself inside a burned-out cabin after a gunfight and standoff in the San Bernadino mountains.

The scorned ex-LAPD cop, whose revenge-killing spree sparked the biggest manhunt in California history, engaged in a fierce gunfight Tuesday afternoon that killed a sheriff’s deputy, followed by a standoff that saw SWAT teams surround the cabin in which the Navy-trained marksman was holed up.

KTLA reported (below) Tuesday evening that law enforcement officers pulled Dorner’s body out of the fire, but that report was then refuted.

#BREAKING: LAPD Source Confirms to KTLA That Body Found in Burned Cabin is That of Fired LAPD Officer Chris Dorner

According to KSBY.com, LAPD Cmdr. Andrew Smith said that the cabin was at the time too hot to enter.

“Any reports of a body being found are not true,” Smith said at a news conference late Tuesday night.

Hours later, a body was finally pulled out of the debris, but it was too badly burned to be immediately identified. On Thursday, an autopsy revealed that the body was in fact Dorner’s, identified by his dental records and that he died of a single self-inflicted gunshot wound.

Here’s what you need to know about the apparent ending to Dorner’s nine-day rampage.

1. Dorner Had A Couple Tied Up Hostage


According to law enforcement officials, Dorner broke into a cabin off Route 38, on the same mountain where his truck was found burning days ago. A couple who owned the cabin went to clean it on Tuesday and when they found Dorner, he tied them up in plastic zip ties and left in their car. One of them escaped and alerted authorities early Tuesday afternoon.

2. Police Spotted Dorner
California Department of Fish and Wildlife officers spotted the reported stolen car, a purple Nissan. Dorner turned down an icy road to make a getaway, but lost control of the car and crashed it.

3. Dorner and Police Engaged in a Car-to-Car Firefight


Chris Dorner hijacked a white pickup truck and crashed it before barricading himself in a cabin.

After fleeing, Dorner reportedly emerged from the woods and approached another vehicle, a white pickup truck. He pointed a gun at the owner, who was in the vehicle with his dog and ordered them out. Dorner drove off and the owner reported the carjacking. According to the Los Angeles Times, a Wildlife police officer spotted the second stolen vehicle and radioed his colleagues that Dorner was coming in their direction. As police passed him, Dorner rolled his window down and opened fire at the second of two police vehicles. Police fired back, but he sped away only to crash the second stolen vehicle. Dorner fled and barricaded himself in a second cabin.

4. There Was a Massive Shootout
Police cornered Dorner in the cabin hours later where a massive shootout took place. The San Bernardino Sheriff’s Department shut down Route 38 and four schools in the area were put on lockdown.

5. He Killed a Deputy


Armed officers positioned outside of the cabin.

Dorner approached two officers and opened fire. One of the officers was shot and killed and the other was injured, but expected to live after surgery.

“We’re heartbroken,” Big Bear Lake Mayor Jay Obernolte said. “Words can’t express how grateful we are for the sacrifice those men have made in defense of the community and our thoughts and prayers are with them and their families.”

6. There Was a Standoff
Dorner barricaded himself in the cabin, but police could not confirm for sure that the person inside was in fact Dorner.

“The likelihood is that it is him, but we can’t say for sure,” LAPD Cmdr. Andrew Smith told reporters. “Everyone is very hopeful that this thing ends without further bloodshed. If he’s watching this, the message for (him) is enough is enough. It’s time to turn yourself in. It’s time to end the bloodshed.”

7. A Gunshot Was Heard Inside of the Cabin


The cabin where Chris Dorner barricaded himself into.

After being holed up in the cabin for several hours, police broke the windows, pumped tear gas in the cabin and urged Dorner to surrender. Authorities then started to break down the walls of the cabin. That’s when a single gunshot was heard. An autopsy of Dorner’s body revealed that he died of a single gunshot wound to his head. It seems as though the ex-cop took his own life before police could get to him.

8. The Cabin Erupted Into Flames


An aerial view of the cabin holding Chris Dorner in flames.

After hearing the gunshot, the house erupted into flames and more gunshots were heard, which were believed to have been ammunition going off from the fire.

9. His Body Was Positively Identified.
A body was eventually pulled out of the debris, but it was too badly burned to be immediately identified. The body was positive identified using dental records on Thursday. An autopsy of the body revealed that he died of a single gunshot wound to the head. It seems as though the ex-cop took his own life before police could get to him. 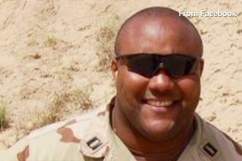 10. Dorner Killed Four People Total
In all, Dorner allegedly killed four people including two police officers in a rampage that began nine days ago. He began with the execution of a basketball coach and her fiance — to punish the woman’s father, the ex-cop-turned-lawyer who represented Dorner when he was fired from the LAPD. He then killed a cop in an ambush and, today, killed the sheriff’s deputy during the shootout that preceded the standoff that led to his own death.

Loading more stories
wpDiscuz
0
0
Would love your thoughts, please comment.x
()
x
| Reply
Cop-killer Christopher Dorner has apparently died in a burning cabin after a gunfight and standoff in the San Bernadino mountains, but his body has yet to be identified.