Cressida Bonas has grabbed the attention of the media ever since she was spotted with Prince Harry on vacation in Switzerland. The two lovebirds have been getting close since Harry’s return from his tour of duty in Afghanistan and are heading for the wedding between Cressida’s half-sister Isabella and Sir Richard Branson’s son Sam. 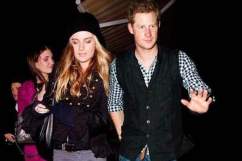 Prince Harry to Marry Cressida Bonas: Wedding Will Be Next Year?

Here are some facts you need to know about Prince Harry’s (true?) love.

1.  Cressida Wants to Introduce Harry to Her Family

It seems as if Cressida Bonas is serious about her relationship with Prince Harry after the Daily Mail reported that the 24-year-old would be introducing the Prince to her family at Isabella’s wedding in South Africa. Prince Harry has already been planning to head to South Africa next week for his charity Sentebale and will be a guest of honor at a fundraising event in Johannesburg. Others in attendance for the wedding include the 28-year-old’s cousins Princess Beatrice and Eugenie.

2. The Couple Were Spotted Cuddling on the Slopes

Before the news of their attending the wedding of the year, Prince Harry and Cressida Bonas were vacationing yesterday in Switzerland, where the media snapped pictures of them embracing at a ski resort. The couple went out for dinner before that to celebrate Cressida’s 24th birthday. They celebrated the occasion with Beatrice and Eugenie along with Harry’s uncle Prince Andrew and his ex-wife Sarah Ferguson. After the dinner, the couple were spotted at the Casbah nighclub partying it up until 3:30 am.

3. She Met Harry Through His Cousin, Princess Eugenie

Speaking of Princess Eugenie, did you know that she was the one who first brought Prince Harry and Cressida Bonas together? They were first introduced in May 2012, according to E! Online, but their romance was cut short after Prince Harry’s antics in Las Vegas.

4. They Kept in Touch While Harry Was at War

Prince Harry returned to a tour of duty in Afghanistan in 2012 — news controversially leaked by an Australian publication. The Metro reported that he and Cressida constantly contacted each other through phone calls, emails and letters. The two finally reunited when Prince Harry returned from a 20-week deployment in early 2013.

Believe it or not, Cressida Bonas’ family has some royal connections due to their Curzon banking fortune. Her mother, Lady Mary-Gaye Curzon, is a banking heiress who was the daughter of 6th Earl Howe, godson of King Edward VII. Her half-sister, Isabella Anstruther Gough-Calthorpe, was once linked with Prince William at one time until she was engaged to Sam, the son of Virgin Atlantic founder Sir Richard Branson.

6. Her Mother Had a Complicated Marital History

Lady Mary-Gaye Curzon was a famous socialite in her time, labeled the “it girl” of the 1960s. She was married and divorced four times and has five kids with three of her husbands. Cressida came from her mother’s third marriage to Old Harrovian entrepreneur Jeffrey Bonas, which ended in 1994 after six years.

Before hooking up with Prince Harry, Cressida used to date Harry Wentworth-Stanley, whose stepfather is a cousin to the Queen, according to FanDaily. Harry Wentworth Stanley met Cressida at Leeds University, where they attended school together. They dated for a while until they graduated. After graduation, Cressida wanted to rekindle her relationship with him until Prince Harry swooped her away, and she ended things with Harry Wentworth.

Cressida appeared on the annual The Tatler List, which compiles people who matter along with her half-sister Isabella. Pippa Middleton was on the front  of the list for a short time until recently when Cressida took the top spot.

9. She Attended the Same School As Harry’s Ex

Cressida attended Leeds University, the same school that Harry’s ex-flame Chelsy Davy went to. Prince Harry and Chelsy Davy dated sporadically from 2004 to 2010. Chelsy attended Leeds to study law and to be close to Prince Harry. They were an on-and-off-couple who made some public appearances — notably during the Concert for Diana, Harry’s cousin Peter Philip’s wedding, and Harry receiving his wings. After ending their relationship, Chelsy attended Prince William and Catherine Middleton’s wedding before going back to work at a London law firm.

According to the Herald Sun, Cressida is into contemporary dance, which she studies at the Trinity Laban Conservatoire of Music and Dance in Greenwich.

Prince Harry to Marry Cressida Bonas: Wedding Will Be Next Year?