Duke University just can’t catch a break, can it? Maybe because it’s full of douches.

This time, the university’s basketball fans are in hot water for their reportedly offensive chants.

Chants such as “Past your bedtime!” and “Bilbo Baggins” were aimed at the 5-foot-11, 157-pound player. But the most offensive chant came in the form of “How’s your Grandma?” while he was shooting free throws. The New York Daily News reported that Lewis’ 83-year-old grandmother passed away from pneumonia on February 1.

Video footage of the moment can be viewed below. The chants can reportedly be heard at the 30-second mark: 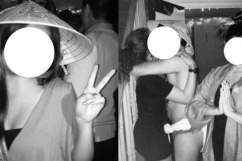 A few witness accounts of the offensive verbal gestures surfaced after the game. Nolan Evans, an editor for N.C. State’s student newspaper, tweeted about what went down:

I was sitting on press row toward the Duke entrance. No reason to demonize the student section, guys. Handful of dumb college kids.

After several people questioned Evans’ truthfulness about this moment, he made sure to back it up with this retweet:

Say what you want about my reliability, but it’s tough to deny this one. twitter.com/RealNolanEvans…

Tyler Lewis’ father, Rick Lewis, told the the North Carolina News and Observer that he heard the chants himself:

It was mostly ‘Past your bedtime,’ but there was an instant when a brief number of students chanted about Tyler’s grandmother. It wasn’t the entire student section, I think a few tried to outdo themselves.

In an e-mail response to the New York Daily News’ story, Duke basketball spokesman Matt Plizga made this statement:

We have looked into the stories that are circulating on the internet, talked to dozens of people who were at the game, and no one we’ve talked to, including several of the 50+ journalists who were sitting in front of the student section, heard the alleged chant. What has become clear is that there was no organized chant by the Cameron Crazies referencing Tyler Lewis’ grandmother, nor was there any reference to his grandmother’s recent passing on the standard cheer sheets that are distributed among the students prior to each game.