The Bank of America branch at 303 Hegenberger Road in Oakland.

The FBI has arrested a San Jose, California, man in an alleged attempt to blow up an Oakland Bank with a car bomb.

Matthew Aaron Llaneza, 28, allegedly believed he was working with the Taliban and had grand designs to spark a U.S. civil war with his epic explosion, which he hoped “would trigger a right-wing counter-response against the government followed by, he hoped, civil war,” according to an FBI release.

But this would-be terrorist had been duped by a federal sting and was packing an impotent explosive.

An undercover agent, posing as a Taliban-connected operative, worked with Llaneza to construct a “bomb” inside an SUV. Llaneza allegedly bought two cell phones, one that was built into the bomb and another to be used to trigger the explosion.

He allegedly targeted the Bank of America branch at at 303 Hegenberger Road in Oakland and, on February 7, drove the bogus bomb to the bank. He parked the SUV in a strategic location, “armed” the trigger device, got out and met up with the undercover agent — who watched as Llaneza tried to trigger the bomb with two phone calls.

Feds swooped in and busted him.

Earlier this week, another duped would-be bomber pleaded guilty in a plot to blow up the New York Federal Reserve: 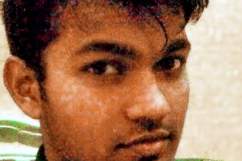