An 11-year-old cancer survivor went into Doernbecher Children’s Hospital in Portland, Oregon with a head injury and is coming out with third degree burns.

The Oregonian reported that Ireland Lane ran out of her hospital room screaming with the front of her t-shirt covered in flames. The girl, a cancer survivor, was in the hospital getting treated for hitting her head at school and losing consciousness. The girl’s father, Stephen Lane, was staying with the girl overnight and was starting to doze off when he was awakened to his daughters screams. Lane caught her in the hallway and put out the flames with his own body.

Ireland was taken to intensive care after suffering from third degree burns from her belly button to her chin, as well as parts of her arms and the bottom of her earlobes.

A solid explanation for the flames remains unknown, but Lane said that investigators told him that it’s possible that the alcohol-based hand sanitizer next to the girl’s bed might have reacted with static electricity to cause the fire.

Lane said that Ireland has no memory of the incident.

“She still has bad dreams, but she doesn’t recall the actual incident, which from my perspective is very good,” he said.

The girl was supposed to leave the hospital the day after the fire, but is now recovering at the Legacy Oregon Burn Center. Ireland’s mother says that she thinks her daughter will be okay. 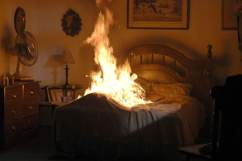