In the most recent instance of a crazed rich person attempting to go to space, Iranian President Mahmoud Ahmadinejad has volunteered to be the first Iranian to leave the planet with the nation’s brand-new space program.

The announcement comes fresh off the heels of the news that Iran allegedly sent a monkey on a sub-orbital flight last week — and brought it back alive. The authenticity of this claim has been disputed, and it’s brought with it a new set of controversies. 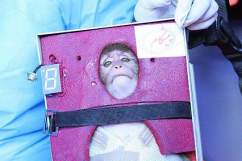 Senator John McCain took to Twitter with his own (arguably racist) remarks on the subject:

So Ahmadinejad wants to be first Iranian in space – wasn’t he just there last week? “Iran launches monkey into space” news.yahoo.com/iran-launches-…

After a massive public outcry, he made a half-assed apology:

Re: Iran space tweet – lighten up folks, can’t everyone take a joke?

Ahmadinejad is quoted by state media as saying, “I’m ready to be the first Iranian to be sacrificed by the scientists of my country and go into space,” and the language he uses brings to light some new questions. The country says the space program’s intentions are peaceful, but what if they’re not? These shuttles could be fitted with nuclear warheads and used for missile tests, so the possibility exists of an offensive strike from one such mission.

If the word of a successful Iranian-monkeyed flight to space is true, it will mean that the nation has sent the primate, a rat, a turtle and worms into space. What they aimed to accomplish by doing so is unclear. Their plans for a manned flight won’t even take shape until at least 2019, so Ahmadinejad has plenty of time to train.

All of this excitement may cause some to forget the many fame-drunk celebrities who decided to (at least try to) get to space. Among the most notable are:

Loading more stories
wpDiscuz
1
0
Would love your thoughts, please comment.x
()
x
| Reply
The Iranian President joins the ranks of the most ridiculous candidates for space travel ever.