Jenna Miscavige Hill, the niece of Scientology leader David Miscavige, grew up in Sea Org, the Church of Scientology’s most elite body, enduring strange practices and emotionally damaging punishments by the Church’s leaders. On Tuesday, her memoir Beyond Belief: My Secret Life Inside Scientology and My Harrowing Escape will be released to the public, exposing “disturbing” details about the 60-year-old religion.

Hill will reveal what it was like growing up in the mysterious organization, how she escaped its confines and started a support group for other ex-Scientologists. In an excerpt from the book, obtained by People Magazine, Hill writes how being in Sea Org was like being in the Navy and that she was only allowed to see her parents for one hour a day. 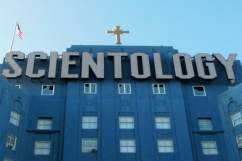 I tried to write my name in my best cursive, the way I’d been learning. I had goose bumps. Just like that, I committed my soul to a billion years of servitude to the Church of Scientology.

Sea Org was run like the Navy: Members wore uniforms and managed all aspects of the church. Married members couldn’t have kids; those who already did sent them to be raised communally.

A Sea Org member was required to be on duty for at least 14 hours a day, seven days a week, with a break for an hour of ‘family time.’ I was too young to understand that seeing your parents only one hour a day was highly unusual.