You might not know his name yet, but you’ve seen him in more films than you know. If you were watching Superbowl XLVII, you no doubt saw Jesse Heiman locking lips with supermodel Bar Refaeli in an ad for website hosting giant GoDaddy. If you haven’t seen the ad yet, do yourself a favor and check it out above. 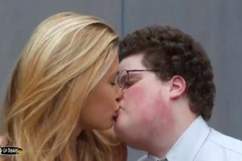 The considerably nerdy-looking actor might not be the first dude that comes to mind on the subject of steamy sex scenes, but Kulich told Mirror that he’s interested in Heiman’s “average guy” style. Heiman told TMZ, “I’ve actually had guys tweet me that they wish they were me, and girls tweet me saying they wish they were Bar. I have girls run up to me and take pictures with me, tweet me for dates.”

Heiman initially deflected the porn-film request, saying “I think I’ll hold out for Playgirl lol jk,” when asked on Facebook. It’s still not clear whether he’ll take the offer.

Meanwhile, just in case he and Refaeli hit it off in the future, we’ve used high-tech facial modeling software to give you what their theoretical child would look like: