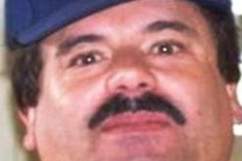 Drug kingpin Joaquin Guzman was named by the city of Chicago as its Public Enemy No. 1 on Thursday. The label hasn’t been used since the prohibition era when gangster Al Capone topped the list. Guzman, nicknamed as El Chapo, leads the Sinaloa cartel that supplies the bulk of Chicago’s narcotics sold in the city. Here’s what you need to know about the powerful drug lord.

1. Joaquin Guzman is Now Listed as Public Enemy No. 1 in Chicago


The Chicago Crime Commission teamed up with the DEA Chicago Field Division and listed Joaquin Guzman Loera a.k.a. El Chapo as Public Enemy No. 1 on Thursday.

“Chapo is wanted in Chicago on charges for participating in international drug trafficking conspiracies in collaboration with 35 other defendants,” the CCC writes.

2. The Label Hasn’t Been Used Since Al Capone
The Chicago Crime Commission has only labeled one other person as Public Enemy No. 1: Al Capone.


Guzman heads the Sinaloa cartel, a drug trafficking organization named after the Mexican state of Sinaloa where it was formed. He became Mexico’s top drug kingpin in 2003 and is considered “the most powerful drug trafficker in the world” by the United States Department of the Treasury.

5. Guzman is Said to be Worse than Al Capone


Al Capone is known as America’s best known gangster who contributed to the illegal activities that gave Chicago its reputation of a lawless city. He is also known as the most ruthless gang boss whoever existed. Apparently, Guzman exceeds Capone’s reputation.

“Guzman is the new Al Capone of Chicago,” Jack Riley, the top Chicago official from the DEA, said at a news conference. “If I was to put those two guys in a ring, El Chapo would eat [Capone] alive.”

6. Chicago is a Hub for Shipping Drugs Across the U.S.
Guzman isn’t from Chigaco, but the city is treating him as a local because of the influence he has on its drug trafficking. Chicago is a major hub for not only receiving drugs, but for distributing them across the U.S. The Sinaloa cartel is accused of allegedly having trafficked 1,500 to 2,000 kilograms of cocaine through Chicago a month.

7. He’s One of the Richest Outlaws


Guzman is not only one of the most dangerous and most wanted outlaws, but also one of the richest. Forbes lists the drug lord as the 63rd most powerful person and the 1,153rd richest person in the world (10th in Mexico). His estimate fortune is believed to be valued at $1 billion.

8. The U.S. Government Has Offered $5 Million Reward for His Capture

9. Drug Trafficking is the Underlying Cause of Chicago’s High Homicide Rate

Mexican drug cartels are not directly liked to the city’s murder rate, but the DEA official said that Sinaloa cartel-led drug trafficking is an underlying cause. Territorial battles between street gangs are blamed for rising homicide rates in Chicago.

Loading more stories
wpDiscuz
0
0
Would love your thoughts, please comment.x
()
x
| Reply
The powerful drug lord has been named by the city of Chicago as Public Enemy No. 1, a title that hasn't been used since Al Capone.