César Vallejo striker Piero Alva scored a controversial goal after Club Unión Comercio goalkeeper Juan Flores collapsed to the ground from heat exhaustion. The ball rolls out of Flores’ grasp and Alva takes the opportunity to kick the ball into the net.

The goal was made during a first division game between the two teams. When a soccer player goes down with an injury, it’s customary that the ball gets played out of bounds, but since the referee didn’t blow the whistle, the game went on. While the play was not entirely ethical, it was still legit. The Guardian reports that Alva had no remorse and backed up his goal.

“Football is for the living,” Alva commented. 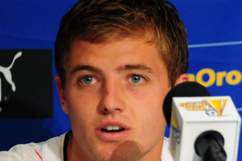 US Soccer Star Robbie Rogers Comes Out As Gay & Retires

Read More
Action Videos, Soccer
wpDiscuz
0
0
Would love your thoughts, please comment.x
()
x
| Reply
The striker backed up his goal by commenting that "football is for the living."