Reeva Steenkamp has become a worldwide household name after her death at the hands of her boyfriend, paralympic star Oscar “Blade Runner” Pistorius. The model-turned-paralegal had a lot going for her when her life was cut short. Here’s what you should know about the South African beauty.

1. She Was Raised in Port Elizabeth, South Africa


Reeva Steenkamp was born in Cape Town but grew up in Port Elizabeth with her parents. The 29-year-old completed her education at the Port Elizabeth School in 2001. “She was a vibrant, friendly, diligent, and motivated student who was popular with and respected by staff and peers alike,” Greg Stokell, headmaster of St. Dominic’s Priory school in Port Elizabeth, told The Times. She was known as a smart scholar and talented athlete, competing in sports like hockey and swimming.


Reeva Steenkamp was a celebrity in her own right as a model. She appeared in FHM and was ranked No. 45 in the magazine’s annual 100 Sexiest Women list in 2012. She was the face of Avon cosmetics in South Africa. She modeled for other companies like Sivana Diamonds, Toyota, Clover, and the Italian brand Zui.

3. She Worked as a Paralegal
While working as a model, Reeva also pursued her dream of going into law. She proved that she was a beauty with brains when she graduated from law school at the Nelson Mandela Metropolitan University. She applied for the bar exam in 2011 and hoped to become a legal advocate after she turned 30.

4. She Was Unlucky in Dating


E! Online reported that in her final interview, Reeva Steenkamp was asked if she had a bad dating experience, and she replied that she “once had to get a restraining order against a guy:

I went on one date with him and on the way home to drop me off, we had to ‘pop by his place to let the dogs out’ as he’d forgotten. He didn’t own any pets and after I told him there wouldn’t be a second date, he moved back home with his parents because ‘his house smelled of my perfume.’ Psycho.

She also talked about how her biggest crush in school ended up being gay. “At varsity I had the biggest crush on a guy in my class. He turned out to be gay (another classmate broke the news to me) and now he is one of my best friends.”

5. She Was Scheduled to Give a Speech about Domestic Violence on the Day She Was Shot Dead by Her Boyfriend

On the day she died, Steenkamp was scheduled to give a speech at a Johannesburg school about her upbringing and her fight against abuse toward women. Her publicist, Sarita Tomlinson, had a copy of Steenkamp’s speech. Tomlinson described the speech, saying it “was about empowerment and inspiration and what inspires you and how to follow your dreams.” 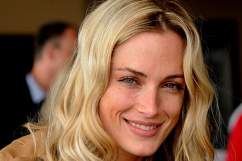 6. She Advocated Against Sexual Abuse

Reeva Steenkamp was an active supporter of women, fighting against abuse. On her Instagram page she posted about this support, including one post days before her death that talked about a girl in her area who was a victim:

7. She Starred in a Reality Show Before Her Death

Steenkamp was set to appear as a celebrity contestant in the fifth season of a Jamaican reality show, Tropika Island of Treasure Show. She spent two and a half weeks filming in Jamaica for the show, which premieres this Saturday in South Africa. The show is set to air this weekend and will dedicate the episodes to her memory. Described as a mix between Big Brother and Survivor, the show was discussed by producer Samantha Moon, who told People:

Every episode that she is in, every frame that she so ably dominates — shines with her light and her laughter echoes in every conversation, and we want to share these special memories with the rest of South Africa.


When Steenkamp and Oscar Pistorius were spotted together at the South Africa Sports Awards last year, the model denied reports that they were dating. Huffington Post reported that they later became an item and had been together for a few months, according to her publicist.

9. She Planned a Valentine’s Day Surprise For Oscar
Less than 21 hours before her death, Reeva was planning a surprise for Oscar on Valentine’s Day, which she mentioned in her Twitter account.

When she came to meet Oscar at his place, he mistook her for a burglar and shot her, he claims. However, he’s been charged with premeditated murder.

10. She Had a Range of Hobbies

Steenkamp’s biography on the Tropika Island website mentioned she was into fast cars and cooking. Also:

She prefers to read a book on her off days and spend quality time with friends and family.

Loading more stories
wpDiscuz
0
0
Would love your thoughts, please comment.x
()
x
| Reply
The blonde bombshell had a bright future before she was gunned down by the Blade Runner.