A 46-year-old man, identified as award winning television and short film director Adam Strange, was mauled to death by a 14-foot shark, possibly a great white, on Wednesday as he was swimming in the waters of Muriwai Beach in Auckland, New Zealand, reports the Daily Mail.

Up to three more sharks are said to have been drawn to the attack as hundreds of horrified beachgoers watched. Officers fired at least 20 shots at the shark in an attempt to rescue the man, but it was too late.

Fisherman Pio Mosie, who witnessed the attack told stuff.co.nz that it was a “nightmare.”

“He was still alive,” Mosie said. “He put his head up. We called him to swim over the rock to where we were. He raised his hand up and then while he was rising his hand up we saw another attack and pull him in the water. He came back up. His head was on the water… then we notice he was already dead.”

Strange’s body was later pulled from the sea as Muriwai and surrounding beaches were closed.

Clinton Duffy, a shark expert with the Department of Conservation, said that only 12 to 14 people have been killed by sharks in New Zealand since record-keeping began in 1837. 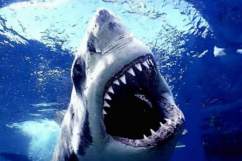 Strange was a director of short films. According to a biography on his website, one of his films, Aphrodite’s Farm, had been in 10 international film festivals in seven countries and won the Crystal Bear award for Best Short Film at the Berlin Film Festival last year. He is survived by his wife, Meg, and their baby daughter.

Loading more stories
wpDiscuz
0
0
Would love your thoughts, please comment.x
()
x
| Reply
A man was mauled to death by a 14-foot shark on Wednesday as he was swimming in the waters of Muriwai Beach in New Zealand