Authorities in Missouri are hunting for three inmates who escaped from Butler County Jail, according to Seattle Pi. Two of the inmates are murder suspects, and all three are awaiting trial. The escape happened at around 11:30 p.m. Monday, and it was discovered a short while after. The escapees are considered to be armed and extremely dangerous by authorities.

The inmates, Matthew Brandon Cook, Kade Reaves Stringfellow and Rodney Joe Green, reportedly escaped their cells through the ceiling and exited the jail by crawling through air ducts. Sheriff Mark Dobbs blames the design of the building for the escape — he said that some walls don’t connect to the ceiling, and that he and some previous sheriffs have tried unsuccessfully to get them fixed.

With the severity of their crimes they were being held for, we do believe it’s possible they may have the capability to get their hands on weapons.

Police forces in several surrounding towns were participating in the search, and schools in the area were taking every precaution, including restricting access. Airplanes were also used in the search.

Cook, 29, is being charged with first-degree murder, robbery and other offenses after in the killing of Sean Crow on February 19. Stringfellow, 23, is being charged with second-degree murder in the death of his infant son. Stringfellow said that he slipped and fell while holding the child, but that was inconsistent with the medical findings — abuse is the suspected cause of death. Green, 40, is suspected of breaking into a couple’s home and shooting them, in the leg and the hand. Both victims survived, although Green got away in their pickup truck. He was apprehended in a high-speed chase. 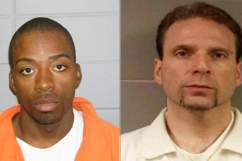