A former top ballerina with the world famous Bolshoi theater has appeared on Russian state TV accusing the dance company of pimping out its female dancer to rich donors.

Anastasia Volochkova, who was fired from the theater 10 years ago for being “too fat“, stated that the pimping practice was now “a lot worse” than when she was still pirouetting.

She alleged that ballerinas were pressured by the the theater’s management to attend parties and were expected to accompany rich businessmen to bed. According to Volochkova, resistance could lead to professional repercussions. 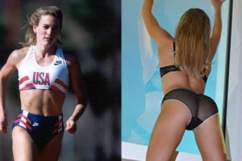 It seems like the world renowned Bolshoi theater is getting more attention from its scandals than from its dancing. Volochkova claim comes just weeks after police arrested a top Bolshoi dancer for dousing the theaters artistic director Sergei Filin with sulfuric acid. Filin was left with severe burns on his face and is recovering in a German hospital, where doctors are fighting to save his eyesight.