Cardinal Keith O’Brien may want to reverse his outspoken stance against gay rights.

A month before his retirement, three priests and a former priest have reported him to Vatican over alleged sex crimes starting over 30 years ago. The Guardian reports:

Three priests and a former priest in Scotland have reported the most senior Catholic clergyman in Britain, Cardinal Keith O’Brien, to the Vatican over allegations of inappropriate behaviour stretching back 30 years.

One priest, whose name has not be released, was allegedly in a long-term relationship with O’Brien and reported him to the Vatican in retaliation for his vitriolic comments against gay rights last winter. O’Brien has been quoted as calling homosexuality a “grotesque subversion,” according to the Huffington Post.

That’s when the relationship turned sour, according to the Guardian:

The men had known each other for more than 30 years, and been in a long-standing relationship. He had continued to be in close contact with the cardinal…visiting his former official residence in Edinburgh, before turning against him last year.

Keith O’Brien has admitted to sexual misconduct, but has never addressed any specifics.

Call your girlfriend (or boyfriend) and tell them!

The accuser and presumably ex-boyfriend of the cardinal is now an ex-priest but holds a church position on mainland Europe, while O’Brien has been quoted as saying in Gay Star News:

I will now spend the rest of my life in retirement. I will play no further part in the public life of the Catholic Church in Scotland.

Just the latest development for the need of major reform in the Catholic church. 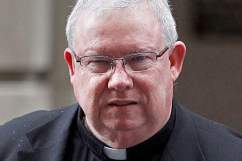