For the first time ever, the U.S. Supreme Court tackled the issue of gay marriage, reviewing the constitutionality of California’s Proposition 8 ban on same-sex marriage and the Defense of Marriage Act (DOMA), a federal law that defines marriage between only a man and a woman.

Here is the audio from the US Supreme Court hearing, known as Hollingsworth (The Petitioner) v Perry.

And here’s the full transcript: 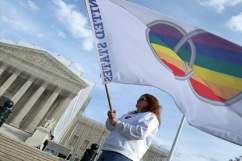 Today social media had their say on the issue with more than 70,000 people in the US changing their profile picture to an equality symbol that promotes same sex marriage.