Two American tourists were walking along the beach in Cabo San Lucas, Mexico when a giant wave pulled them out to sea, killing one and injuring the other, reports The Epoch Times.

A 65-year-old woman and a 70-year-old man were walking along the beach near the area’s stone arch when a rogue wave swept them out to sea. They were walking back to their hotel when the wave struck. They were rescued by Navy personnel, but the woman was declared dead and the man is said to be in critical condition.

The relationship between the two is unclear at the moment. Their identities have yet to be relased, but the woman had a Wisconsin driver’s license and the man had a Nebraska license.

A giant wave swept two American tourists out to sea as they walked near the Cabo San Lucas stone arch.

Cabo San Lucas is a Mexican resort located at the southern tip of Baja California in western Mexico. 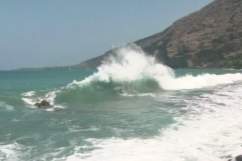 Read More
Deaths, Mexico
Two American tourists were walking along the beach in Cabo San Lucas when a giant wave pulled them out to sea.