Julio Acevedo crashed into Raizy and Nathan Glauber, killing them and their unborn child.

Julio Acevedo, the hit-and-run driver wanted for the deaths of a young Brooklyn couple and their unborn baby, turned himself in to the police in Pennsylvania on Wednesday, reports the New York Times. The fugitive fled the scene after crashing a borrowed BMW into a livery cab carrying expectant parents Raizy and Nathan Glauber. The baby was delivered prematurely as the mother was dying, but passed away the next day.

Acevedo avoided being captured by the police for three days, but surrendered on Wednesday to New York City detectives in the parking lot of a convenient store parking lot in Bethlehem, Pennsylvania. The surrender was arranged by a friend, Derrick Hamilton, who told cops to meet at the designated parking lot. The 44-year-old man said he fled from the crash because he was “scared.”

Acevedo told reporters through phone interviews that he intended to turn himself in, but police were skeptical.

“We don’t know if this is a game or what,” the police commissioner, Raymond W. Kelly, said hours before Mr. Acevedo’s surrender.

The fugitive was taken to a nearby jail and is expected to be transferred to New York City.

Acevedo previously served time in jail for a 1987 murder and had a pending court date for a drunk driving charge. He was speeding in the borrowed BMW at the time of the accident and the owner of the car was arrested for insurance fraud.

Raizy and Nathan Glaubera were part of a ultra-Orthodox Jewish community in Brooklyn, whose deaths rocked the tight-knit neighborhood. 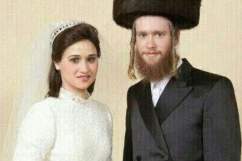